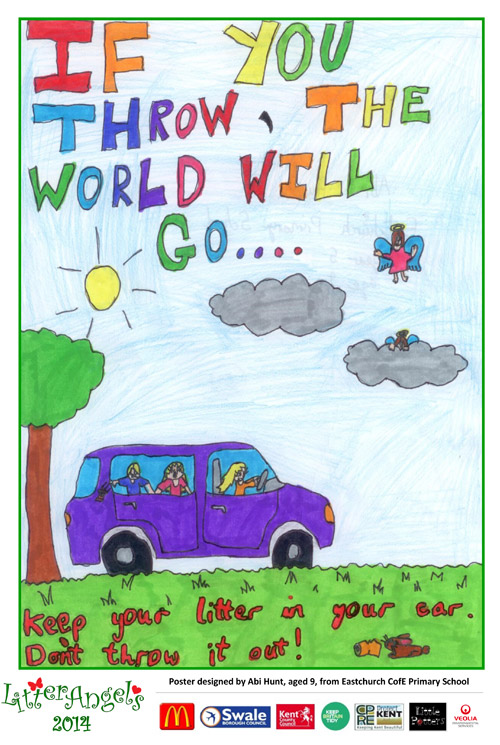 The annual competition, in which children from primary schools across Sittingbourne and Sheppey compete, had the theme this year of encouraging people to not throw litter from vehicles.

The colourful poster designed by Abi, who is 9 years old, got that message over perfectly and will now be printed onto metal plaques and be displayed in local McDonalds car parks alongside winning posters from previous years. 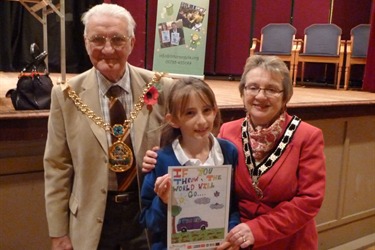 Litter Angels are hoping that Swale Borough Council will allow the winning poster to be displayed also in all the public car parks in the borough.

Abi was made an honorary Litter Angel at a presentation held in the UK Paper Club. In addition she was presented with a certificate, a mug and a £50 cheque. Eastchurch C of E Primary School, who organised an internal school competition, won a £100 cheque.

The Mayor and Mayoress of Swale presented awards to all 20 finalists, one from each school that took part, after which Abi was announced to have been the winner by Paul Crocker, the franchise owner of all three local McDonalds restaurants.

“This year’s competition was bigger and better than ever before, with over 600 children taking part. I would like to congratulate the 100 children whose posters were shortlisted for the final, the winner from each school and of course, the overall winner, Abi Hunt.

“I hope Abi’s poster will encourage motorists and their passengers who eat in cars to be more responsible.

“I would urge people to keep their litter in the car until they reach their destination and they are able to find a litter bin. It is neither clever nor cool to defile our local environment by throwing rubbish out of car windows, so don’t do it.”