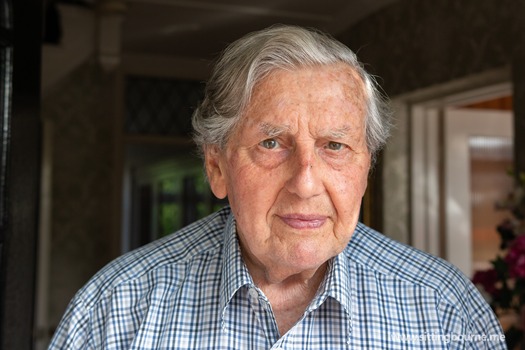 A great deal of local history is written by local authors and I am always interested to learn more about the author and the storey behind the book. So, when I heard that Vic Wise had just published a book entitled “The Sea In My Blood” I quickly arranged a meeting.

I am greeted at the door by Vic’s wife Pat who has already explained that Vic isn’t particularly keen on all the publicity around the book, so it is Pat who ends up doing most of the talking.

Pat explained that Vic has kept a daily diary since he was a child, a pursuit that he still maintains to this day. As you can imagine there is a substantial amount of interesting material nestled amongst the thousands of diary entries and Pat and Vic wanted to create something that both current and future generations of their family and friends might enjoy. So, the original idea wasn’t so much about becoming an author as leaving behind a personal legacy for the family.

Pat said “I wanted to get the dairies published or put in book form for the family and friends and I didn’t know how to go about it. However, I knew that the History Hub in the Forum Shopping Centre, has these little booklets, so I went in and enquired and there I met Pat Robinson.”

“She took control of the project and was brilliant, absolutely brilliant and she came up with lots of idea and suggestions, as well as finding lots of old photographs of local places that were mentioned in his diaries.”

“Pat also ended up arranging the printing which I paid for, but the money from the books sold in the hub will go to the Historical Research Group of Sittingbourne.”

From the title alone, you might assume that this book is largely concerned with Vic’s time at sea, and whilst the sea plays a major role in his life, there is a great deal more to the book than that.

Vic, who was born in Milton in 1926, tells of his childhood growing up in Sittingbourne before the Second World War.

Pat explains “Vic’s father who was a barge skipper became unemployed during the thirties after barges were replaced by lorries and as a result, Vic along with his brother and sister had to make use of a soup kitchen in Shortlands Road, so there is lots of interesting little bits about Sittingbourne in the book.”

After leaving school he worked as a Milkman and on the Sittingbourne and Kemsley Light Railway, before joining the Merchant Navy in 1944. Vic saw at first hand the D-day landings and experienced his ship being torpedoed.

He went on to travel around the world many times; working his way up to becoming a Master Mariner. After ten years at sea, he settled down in Sittingbourne.

Pat adds “Whilst a large part of the book is about his 10 years in the Merchant Navy, the rest of it is about local history.”

“During his time at Bowaters at Riddim Dock he made friends with some of the local ship owners and government brought in new rules about coastal ship crews who now had to be properly trained. So, they approached Vic to set up this training scheme for them. However, because these local ship owners weren’t willing to pay the boys who would go there, Vic approached the government to set up a Youth Training Scheme which he ran for about 9 years.”

“That came to end when he was made redundant again at the age of 63. He still taught navigation at night school at the local adult education, so he still had a sort of a job. Then he did work with KCC undertaking road traffic surveys and also checking tickets on the buses to fill in the gap.”

Believe me when I say there is a lot more in the book.

Pat ends our chat by saying “I’ve sat down since it has been edited and Pat has made such a good job of it, and I’ve really enjoyed reading through it, it's like a novel.”

You can purchase the book titled “The Sea In My Blood” for £5 at the Heritage Hub in the Forum.