Home / Blog / A new Town Centre complete by June 2017
Following agreement by Swale Cabinet members last night to a revised development agreement with the Spirit of Sittingbourne, the development consortium finally put their cards on the table and announced a definitive timescale for phase 1 of the proposals which should see construction start around March 2015 and be completed by June 2017. 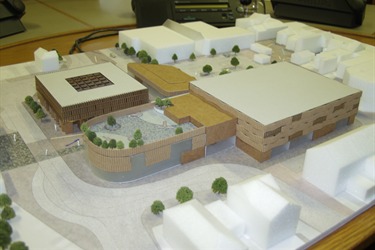 Looking across the current St Michael's roundabout with the forum at the top.

Today we were able for the first time to see the current Master Plan for the development and find out exactly what we should expect from Phase 1.

In a nutshell the larger part of the phase 1 proposal will be located directly in front of the train station occupying the roundabout and existing train station car park, stretching across what is currently the route of St Micheal’s Road and filling approximately half of the present Forum Car Park. 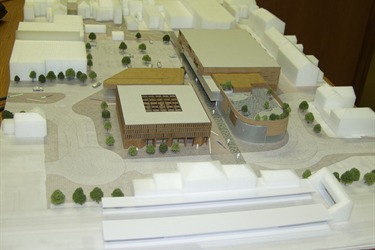 Looking across from the Train Station which is the white building at the bottom of the photo.

The star attraction has to be a new 20,000 sq ft, 8 screen cinema for which the consortium is in currently in negotiations with Vue Entertainment. This would be supplemented by 30,000sq ft of space (approx. 5 to 8 shops) for a variety of restaurant chains and retailers.

Sitting next to this and directly in front of the train station will be 9,000 sq ft of flexible performance space named “The Venue” for which it is suggested there are a multitude of potential uses, including music, arts, entertainment, events and exhibitions.

There will also be a new multi-storey car park located somewhere in the vicinity of the small car park at the rear of the Forum with around 230 spaces to replace some of the car parking lost to the development. 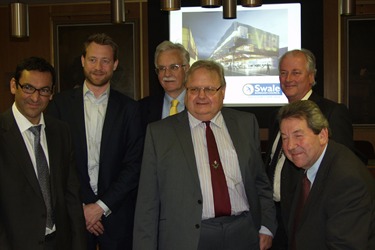 Also announced as part of phase 1 is the development of the current Biffa site to the rear of the Train Station and opposite Morrisions which is set to provide 35,000 sq ft of what they called large format retail or to you and me, between 2 and 6 units as per the current retail park where Homebase is located. This would also host a further 100 car parking spaces.

Finally there are some smaller sites which will be developed to contain around 50 houses. On the subject of houses the empty bit of land next to Morrison’s will be developed with around 140 town houses contrary to what we have previous been told.

On a slightly different subject it has also been confirmed that Tesco are after all looking to sell their land holding to the north of the railway line and that the former Bell Shopping Centre sit is in the hands of administrators following the demise of the developer.

any word on the horrendous effect this is likely to have on traffic?  it's at a standstill at weekends now, let alone after this

Its a bit early yet, but the Council have promised to provide us with some further images which we will of course put up on this website

Interesting. Are the details available online for this 'revised development agreement' or is it too early?