Another day another delay, plus last minute diversion changes 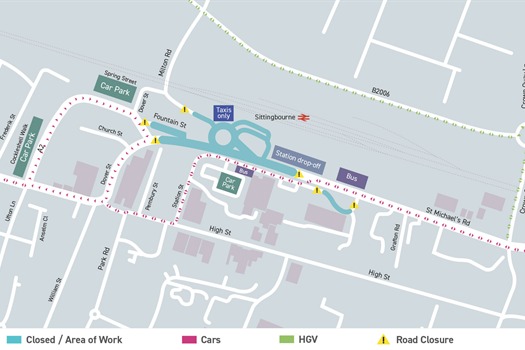 So at the last minute, the start of the roadworks connected with the town centre redevelopment has been slightly delayed until 8 pm tonight, at least that is what the current official line is. More importantly, The Spirit of Sittingbourne has chosen to change part of the diversion route, although in their usual abysmal style of communications this is not even mentioned.

So if you are one of the 28,000 people who watched our video I can only apologise, but it would appear that the Spirit of Sittingbourne jumped the gun and had not got their diversion routes approved before they held the press briefing and leafleted half of Sittingbourne.

So rather than the giant circuit around town using St Michaels Road in one direction and the Eurolink Way (B2006) in the other direction they have dropped the idea of funnelling traffic via Dover Street and Milton Road and instead have decided to make traffic continue round the one way system and up West Street, turning left into Station Street and then join St Michaels Road. The same for traffic coming from the opposite direction. 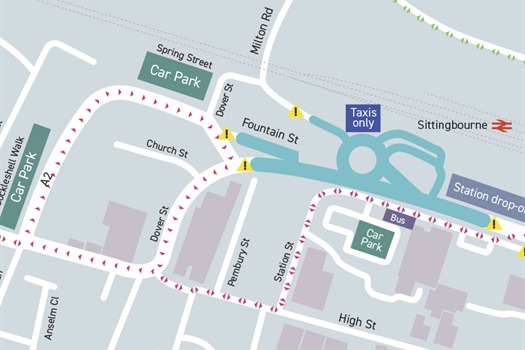 This effectively means that they will be diverting the full traffic flow of St Michaels Road through Station Street and West Street, which is a very questionable decision if you ask me.

The Spirit of Sittingbourne suggests that town centre visitors will need to review their parking options over the period of the roadworks and bus users should take note of temporary stop changes.

They have also stated that the car park at the Forum will re-open on Wednesday 13 June.

Have read today on M2 Highways England website they are also doing day work at J5 from tomorrow. spreading the work over about five days.

If it does not bode well now then wait until the M2 is closed partially or totally due to a RTC and then see what happens.

So how do you get from Morrisons to the town. Can you go down Milton Road and right into Dover Street and then join the flow.

They might make up their minds one of these days, this is old route been revamped by them, wonder if the M2 closing lanes between 8 and 6 overnight between here and Brenley Corner for a week starting tonight has anything to do with it. These temporary bus stops I was told by Arriva Office one would be in Remembrance Avenue opposit Sainsburys., so now where will they be?. Right complete mess up. Heaven help us all.

All this will be a waste of money these so called improvements will not improve the town at all with the town permanently gridlocked nowhere for people to park and almost no disabled parking and when the so called new hotel is built they are going to be given first call on some of the parking people are going elsewhere and once they go elsewhere they will not come back which will kill the high street  and the town. All these so called new restaurants and café s will only cut one another throats people can only use so many.

Sounds a bit like too 'many chiefs'.  After all this time, this is the 'best' plan they could come up with, I bet the traffic lights haven't been resynced to allow for the change in traffic flow either.