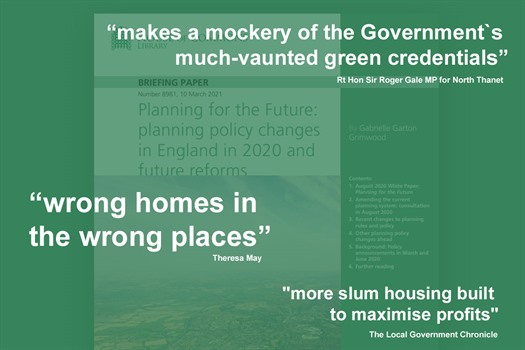 Planning reforms announced in the Queen’s speech which set out to cut red tape and overhaul the planning process have faced a fierce backlash and almost universal condemnation from just about every quarter, including the former prime minister.

One of the key tenants to the new proposals is the removal of the right of residents to have any input into the planning process beyond the early formation of the council’s local plan.

Currently there are two opportunities for residents to have their say on planning issues that might affect them. The first is, as stated above, during the formation of the local plan, a stage which completely bypasses the majority of residents and only years later when an actual planning application surfaces are most residents afforded their second opportunity to participate in the planning process.

Economics editor at openDemocracy, Laurie Macfarlane who wrote an excellent article in The Guardian says as a result of the proposals

“only those with psychic powers to foresee future developments will be able to object to them at the initial plan-making stage. Democratic oversight of individual developments will soon be a thing of the past.”

“the reforms serve to transfer power away from local elected representatives and towards private developers, who will be able to build whatever they like, unopposed”


If people think this actually has anything to do with making housing more affordable or increasing supply, I think they are going to be sorely disappointed. The proposals are likely to have very little impact on the day-to-day business of building housing. However, they will allow developers to amass large volumes of land with planning permission to bank for future use.

For a system, that I would argue, is already skewed in favour of developers, this tips the balance to the point where planning as we know it becomes almost redundant. In fact, I would imagine that a lot of people who currently earn a living out of the planning system are going to be looking at these proposals with abject horror.

“Local government is just going to be reduced to finding land allocations which will then have automatic planning permission without any input from the local community or the council about the desirability of sites, design and the construction of sites and whether they meet social need.”


For those who still think that it is the planning system that is holding back the delivery of new homes, nine of out ten planning applications are approved and over the last decade more than 1 million homes with planning permission are yet to be built.

When the Conservatives came to power in May 2010 the average house price was £170,846 and as of January 2021 it now stands at £249,309 an increase of 46%. During the same period wages have risen by around 21.5%, so clearly the governments policy of forcing councils to open up land for development to meet ever increasing housing targets has been a spectacular failure.

The simple fact is that it is developers who control the flow of new housing onto the market, deliberately stemming the tide in order to optimise profit margins. This is further exacerbated by the strategic building up of land banks, where developers purchase land, sometimes a decade or more before they actually build anything to realise the maximum yield from years of inflation on the market value of the land.

Developers also drip feed supply to control profit margins, and it is not unheard of for sites to be mothballed if margins decline. It would, after all, be commercial suicide for any developer to deliberately engineer a scenario where house prices fall, let alone on a long term basis.

“At best the reforms represent an ideological crusade to undermine local authorities and hand over more power to private developers. At worst, they are part of a coordinated attempt to undermine English democracy."


A spokesperson for the Community Planning Alliance said,

“There is nothing in the announcement about affordable housing. Nor does it address how developers will be forced to build out existing permissions nor how councils should focus on bringing back empty homes into use.”

“There are a million unused planning consents for houses waiting to be built and brownfield sites available for housing construction and empty inner-city commercial properties that can be tastefully converted into new homes before we need to touch another blade of green grass for development.”


When the proposals were first aired Theresa May led a fierce onslaught by Tory ex-cabinet ministers against the proposals and demanded a rethink. Theresa May has said that the government’s Planning Bill will put the “wrong homes in the wrong places”

However, our MP Gordon Henderson is happy to sit on the fence and even offer to support the proposals as long as special provision is made to exempt Kent and in particular Swale from anymore unsuitable housing developments.

It is hard to know where to start, clearly its highly unlikely, if not completely unworkable, to suggest that Kent could somehow have an alternative planning system to the remainder of the UK. Secondly ambiguous statements, such as ‘unsuitable housing developments’ are subjective and wide open to interpretation and abuse.

As food for thought, openDemocracy provided some insight into the level of donations the Conservative party received from some of the UK’s richest property developers and construction businesses.

In less than a year after Boris Johnson became prime minister more than £11 million was received from more than 120 individuals and companies connected to the sector.