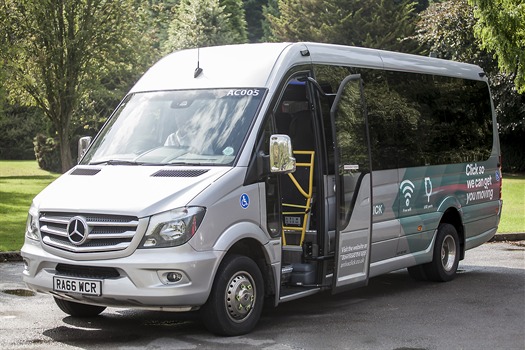 ArrivaClick, which has been operating a smart minibus service in and around Sittingbourne, including Kent Science Park, turns one year old in April and has launched a children’s birthday card design competition to help celebrate.

Over the past year, over 8,000 people have downloaded the ArrivaClick app, which allows people to select pick up and drop off points, pay with stored credit card details and track vehicles via a smartphone so you know when to expect its arrival. Users are guaranteed a comfortable seat in one of Arriva’s new, Mercedes minibuses, plus use of Wi-Fi and charge points. Prices for journeys are quoted during the mobile app booking process, so users are in complete control.

ArrivaClick has asked local primary school children to take part in a competition to create a 1st birthday card for the anniversary and has teamed up with Sittingbourne FC for the winner’s prize. Not only will the winner see their card turned into a flyer that will be delivered to nearly 25,000 houses within the Sittingbourne area, but they will also receive a fantastic family day out at a Sittingbourne FC match of their choice which will include becoming the ArrivaClick & Sittingbourne FC mascot for the game, signed photos and merchandise. Runners-up will receive Amazon vouchers. Card designs will be judged on creativity.

Oliver Monahan, Area Managing Director for Arriva in Kent and Surrey said: “We launched ArrivaClick as a trial back in March 2017 and are delighted to be celebrating its 1st birthday. Arriva set out to provide safe, easy to use and affordable transport options for local people and that’s exactly what we’ve done. It's been a fantastic success and we want to involve local children and their creativity in our celebrations. Designs can be anything related to birthdays or ArrivaClick buses and I’m really looking forward to seeing the winning card.”