Home / Blog / Judgement day for Sittingbourne's Floral Displays
On Tuesday afternoon, Sittingbourne welcomed Jim Buttress and Irene Seijo from the South and South East in Bloom organisation, who were here to judge Sittingbourne for it's entry in this years Large Town category of the competition. 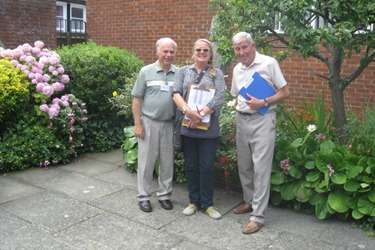 Malcolm Moore, Chairman of Sittingbourne in Bloom, and Irene Seijo and Jim Buttress

Malcolm Moore, the Chairman of Sittingbourne in Bloom, and Committee members took the judges on a 20 mile tour of the town to see the highlights, including the children’s gardening efforts at Grove Park Community School, the amazing allotments at Riddles Road and the work being done at Milton Creek Country Park.

Jim was of course particularly interested in the allotments as he was the gardening judge in this year’s BBC2 allotments programme.

The In Bloom committee will have to wait until September to get the results which will be announced at the annual prize-giving day, this year being held at the Brighton and Hove Albion football ground in Brighton.

A record 400 entrants will compete in the 2014 Southern Water South & South East in Bloom competition.

Bloom chairman, Peter Holman, said: “We’re excited to have hit the 400 entry mark for the first time ever and it is particularly fitting in the year when the national competition everyone is ultimately striving to reach, Britain in Bloom, celebrates its 50th anniversary.