Home / Blog / Sittingbourne Gardeners and Flower Arrangers Society Celebrate 140 Year Anniversary
On Saturday 26th August the Sittingbourne Gardeners and Flower Arrangers Society staged an exhibition at Tunstall Village Hall to celebrate the 140th Anniversary of the Society. The Society was founded in 1874 and at that time had a membership of 27 “subscribers”.

These subscribers, all prominent residents of the area, paid an annual subscription of 10 shillings and 6 pence (52 pence). This may sound very modest but in modern terms, based on the average weekly wage, that would represent about £400. These people must have been keen gardeners! 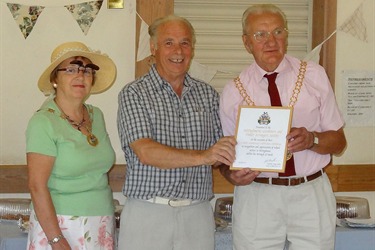 The exhibition which was attended by the Mayor and Mayoress of Swale, Councillor George Bobbin and his wife Brenda, included displays of members’ craft skills, garden produce, house plants and floral arrangements and a large display illustrating the Society’s history over the years.

There was also a practical display on the secrets of how to make organic garden compost. The exhibition was well attended and the refreshments produced by members were much appreciated.

The next event celebrating the Society’s longevity will be on Thursday 2nd October at Tunstall Village Hall when Nick Hamilton, the son of much missed TV gardener Geoff Hamilton, will give an illustrated talk on Barnsdale, the Television Years.

Tickets which, cost £6 for members and £8 for non-members, are already going like hot cakes. They can be obtained from the Society’s Treasurer, Michael Rose, on 01795 473994.