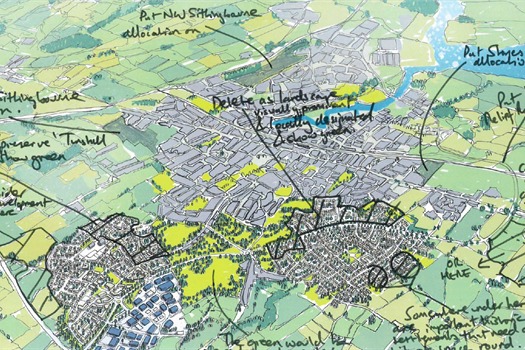 Before I begin I must stress that nothing has yet been agreed and this is at the conceptual ideas stage, although some councillors and the council themselves have already been busy lobbying government and preparing bids which openly promote the concept ahead of the public consultation.

In a the Council is debating whether they should build all future housing beyond what has already been agreed in a couple of supersized “garden town” sites or continue with the present approach of finding suitable land across the entire borough.

You may wonder why they are looking at something so radical having only just housing targets until 2031.

The reason we’re told is based on the need to conduct an early review of the local plan by 2022 to clarify how the council is planning to support the present housing numbers with the planned infrastructure. However, this should not in itself warrant a review of housing numbers.

We’re also informed by the Secretary of State for Housing Communities and Local Government, Sajid Javid that newly proposed targets do not apply to existing local plans, and there is no real justification to opt for a new plan at this time unless of course, the council wishes to deliberately increase housing numbers.

The Council have told us “we are using ‘review’ loosely to differentiate it from the recently adopted Local Plan. The decision as to whether we have a review or a new plan will depend on if and how much the development strategy changes from ‘Bearing Fruits’ and potentially, further impact from national planning policy change.”

However, the Council are already repeatedly using the phrase ‘new’ local plan. This new plan would also extend the time frame by a further 5 years and could add another 17,000 houses. That is more than all the housing in the existing plan which has a target of 13,192 houses over 17 years.

Even if you factor in the 5 extra years that would only generate a need for another 3,880 houses. If you then also factored in the increased government targets of 776 houses per annum to 1054 you would still only reach a total of 8,050 which is acknowledged by the council themselves who believe that a further 7,500 would be sufficient. 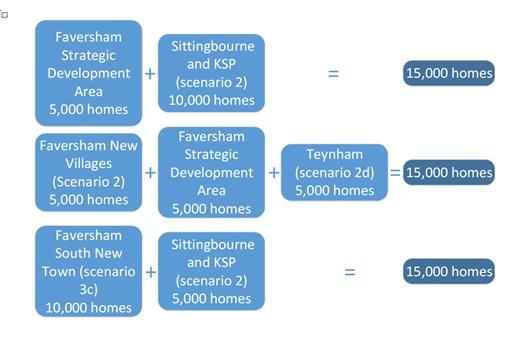 The answer is simple, the new garden town/village style developments are inherently limited by their build-out rate, which in simple terms means that they take an incredibly long time to develop.

What the council are considering here is up to 10,000 houses in a single site, which based on the very limited report data available would take at least 40 years to develop, in fact, the examples shown end dates of 2068 for some of these ideas.

You need to think about that, we will be asked to make decisions now which may affect two or three generations to come.

So what’s in for the Council besides the obvious benefits of reducing the number of applications they would need to deal with, as far as I can ascertain the main driver would appear to be financially motivated.

The idea here is that the council will only issue planning permission on these developments if the developer agrees to contribute somewhere between £30,000 to £50,000 per property to support new infrastructure.

Sounds like a lot of money right, well it certainly is and in order to make this work, the council is planning on issuing an ultimatum to both landowners and developers that they are going to have to lower their expectations on potential profits. By this I mean, landowners will be expected to sell their land significantly below the full commercial value in order that the developer can increase his Section 106 and Community Infrastructure Levy contributions to the Council.

Besides the obvious problems of getting landowners to fall in line and developers who currently repeatedly fail to meet their existing contributions to cough up even more, there are some further challenges in terms of the methods by which the council may legally recoup these contributions.

The Community Infrastructure Levy or CIL as its known is a flat rate fee that has to be applied across all developments, so as I understand they cannot raise that contribution without also increasing contributions on all the existing sites, and besides the council do not currently have this facility in place.

Section 106 contributions, the councils only option right now, may not be used for strategic road infrastructure which is a serious concern, given that the primary purpose of the entire approach is to pay for an A2/M2 link road.

So, I asked how exactly the council were planning on making this idea work in practice and their response was “we are looking at a number of alternative delivery vehicles which have been used successfully elsewhere, which are capable of capturing more land value for infrastructure provision.”

I’ll take that as no flipping clue then.

The council has prepared some suggestions as to where these supersized garden town developments might be located which I have included by way of a simplified map below. 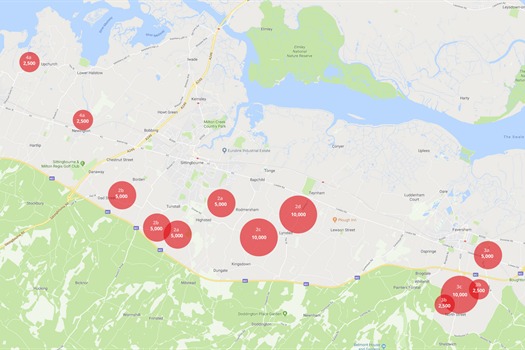 They would be looking to creating two or three new towns and according to the report still, have some further reliance on other smaller new sites beyond that.

The council are keen to maintain that they are simply putting ideas out there, albeit to tackle a problem that largely doesn’t yet exist, with the suggestion that “here are some ideas for how we could approach it, we’ll test them and see what people think” we should be mindful that the council have already floated the idea with central government and more specifically singling out one option, in particular, built a funding bid around testing infrastructure for the exact same option with no scope for testing some of the other options outlined in their report.

Even the report itself singles out that exact same option for a specific illustration, so realistically how much faith can you place in the council to actually listen.

It is abundantly clear that the political focus is on delivering an A2/M2 link and the only concept illustrated is by some remarkable co-incidence almost exactly the same as the Quinn Estates / Kent Science Park proposals. I don’t buy that the Upchurch/Newington options are even on the table and as for Faversham, a key component of the current Local Plan would need to be removed before any of the Faversham options could come forward.

The Council have confirmed today that has not decided whether or not they would be prepared to relinquish the special protection afforded to Faversham. Therefore, we may be consulted on the basis that all options in the report are possible, when clearly, they may not be. I think the council needs to concede right now before the consultation commences that if the public supported any of the Faversham options then the special planning status would end by default.

You may have also noted the absence of any locations on the Isle of Sheppey which is apparently because the house prices are not sufficiently high to make this scheme viable. This is why Faversham comes out as the least problematic option according to the report’s author.

Personally, I remain unconvinced, and I’m not sure we should be planning 50 years ahead, regardless of location, and I should make it clear that is also an option so you don’t have to choose any of the schemes.

A public consultation on these grand ideas is apparently going to be held for 8 weeks starting in April.

If one views anything to do with the so-called science park as a red herring (with the usual promise of employment) and discounts any future increase in its size or even closure then it is possible to come up with a different scenario for the  SBC/Quinn Estates master plan for housing development between the A2 and M2. Rerouting the new link road from just before Cromers Road up the Highsted Valley avoids the problem of developing J5A where Ruins Barn Road goes OVER the M2. Instead you have Bottom Pond Road passing UNDER it which would make the building of exit/joining slip roads much easier (and cheaper).

With all the deviousness when it comes to housing development in Swale it is a case of watch this space.

Swale Council do have an idea of how they intend to fund junction 5A and a link road since they have already applied for funding via KCC to the Housing Infrastructure Fund for transport infrastructure:-

Phase 2 refers to "provision of the additional new road infrastructure, north and south of the A2, creates new links and assists delivery of new development but also opens new possibilities in tandem with the Local Plan Review".

"Options for a new development strategy will be considered as part of the Local Plan Review. This will define growth beyond 2031 and offer the potential for enhanced delivery in the  period 2022-2031".

I think the council's dream "alternative delivery vehicle" to finance the link road may be the Housing Infrastructure Fund: -

Is this being explored / applied for by the council via KCC?

However the housing infrastructure fund example does not quite fit, the example states: -

"The site has a Neighbourhood Plan, reflecting the strong local support for the scheme and
will also form 35% of the district’s housing need."