Home / Blog / Council bury their heads in the sand on Northern Relief Road report findings
The Council have spent literally hundreds of thousands of pounds on traffic modelling work in order to substantiate their grand plans for Sittingbourne’s future. So what happens when the modelling work proves that it isn’t going to work, they plough on regardless.

That’s the outcome following a report that states that Kent Highways are unable to justify completing the road on traffic grounds. 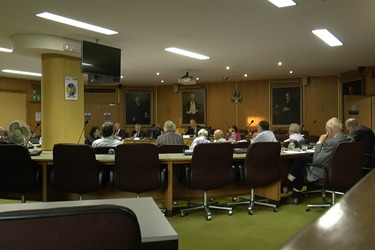 Ruth Goudie, Strategic Transportation Officer at Kent Highways, delivered the bad news at this evenings Joint Transportation Board meeting outlining that completing the Northern Relief Road to the A2 will not be a requirement of the Local Plan going forward.

“It provides a high quality strategic link from the A2 and A249 to the employment sites at Eurolink Way. It carries about 12,000 vehicles a day and the opening of it has altered traffic patterns previous used and those were the traffic patterns used when the proposals for the Local Plan came forward.

“KCC has made is pretty clear that it does not take the Northern Relief Road seriously in which case it is hardly surprising that it was not successful in a bid for Government funding.”

“The economic growth of Sittingbourne really is built around the extension of the industrial estate to the east of Sittingbourne and it’s inevitably a restriction on that growth if you don’t complete this road.”

Cllr Andrew Bowles stated “We need the Northern Relief Road there is no doubt about that. I’m actually disappointed with this report. Swale’s Chief Executive is currently talking to the Cabinet member for Highways to push the scheme forward.”

Cllr Mike Baldock came to the defence of the report

“Northern Distributer Road as it was originally envisaged distributes traffic from the A249 to where it needs to go and back again and when we have an effective flowing A249, and that means our number one priority has to be, and has to quite clearly seen to be, Junction 5, it will function as intended.”

“We've already spent a third of a million pounds, how much more are you suggesting we spend on designing this road. Until we start letting people know the reality, you keep selling them a false myth and you are now suggesting that we keep spending money to perpetuate that myth.

The majority of Councillors present voted in favour of ignoring the findings of the report and recommended that KCC draw up an oven ready scheme to complete the Northern Relief Road to the A2 and to continue to push for funding from the LEP and also to retain the scheme in the Local Plan.