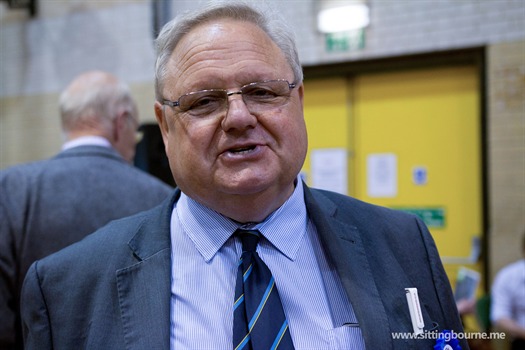 Andrew Bowles the leader of Swale Borough Council who is standing in the forthcoming KCC county elections for the new super-sized ward of Swale East which stretches the entire length of the borough from the A249 in Bredgar all the way to Dunkirk, has pledged that housing must be sited in Sittingbourne and Sheppey first.

So, for those of you who live in Bapchild, Bredgar, Highsted, Lynsted, Milstead, Rodmersham, Tonge, Tunstall and Teynham which all feature within the Swale East ward and are all located within the now defunct Thames Gateway this clearly matters.

Given that the ward now includes such a large population that would be directly affected, especially with his campaign to build new villages in south Sittingbourne, it is a somewhat surprising move.

He argues that the opposition parties are pitching for significant housing to be relocated outside of the Thames Gateway in the Faversham area, but this is disingenuous because Sittingbourne and Sheppey have already taken their own share of housing as well as a large portion of Faversham’s. Therefore, and whilst I have no affiliation with any political party, it would be my guess that the opposition parties are merely attempting to reach a fairer proportional share of housing development across the entire borough.

Cllr Bowles also argues that it’s unfair to locate housing in Faversham due lack of infrastructure investment, however this is a flawed argument because the investment which did occur in Sittingbourne and Sheppey came from the last Labour administration and subsequently the housing did indeed follow.

In fact, following years of developing in Sittingbourne and Sheppey first, due the infrastructure investment we have now reached a point where that very same infrastructure can no longer cater with the level development proposed and the Local Plan is in clear danger of being found unsound as a result.

Finally it is worth noting that the whole concept of the Thames Gateway has been consigned to history and the present government have outlined plans for a new Thames corridor which includes the whole of the borough and further emphasises how dated the councils plan has become before its even been published.

Just to add, for those that are not aware, every single new house being built as part of Sittingbourne Regeneration has already been sold to a private rental company, they will of course make a massive profit from renting to people who would much rather see cheap housing they can buy, after all...that was the original plan was it not ?...we all got excited by these plans and all the good things that were to come from it, but it was just a pipedream, there will be nothing but more misery for those hoping they were to get a foot on the housing ladder...not a chance...there never was.

Good article.  This sums up the current situation very well - it is an absolute disgrace.

Swale Borough Council do not have enough money to improve the infrastructure in any part of the borough.

The money comes from the developers who build the houses. If Faversham do not take their fair share of the increase in housing then the infrastructure will never be improved. The road network in the southwest of the borough all along the A249 corridor can not cope so the council's answer is build more houses in this area to get the money to improve the infrastructure, which will then just be overload again with even more vehicles.

And what does more vehicles mean - horrendous air pollution and everyone suffers.

Will housing be provided to meet the needs of low income local families?  Probably not.  Will developers actually build the amenities they promise?  Probably not.

There's a more serious problem though, and that is short-termism.  The world is full of uncertainty.  We're putting Grade 1 agricultural land under concrete, threatening our future food security.  If we can't provide more food from our own resources it won't only be those on social security who suffer from food poverty.

He lives in Selling, Faversham so NIMBY !!!!