Big changes ahead as Council plans to sell off car parks.

Home / Blog / Big changes ahead as Council plans to sell off car parks.
As the debate about the new plans for a Council run multi storey car park continues, the Council are quietly paving the way to remove a significant amount of the existing car park provision within Sittingbourne Town Centre. 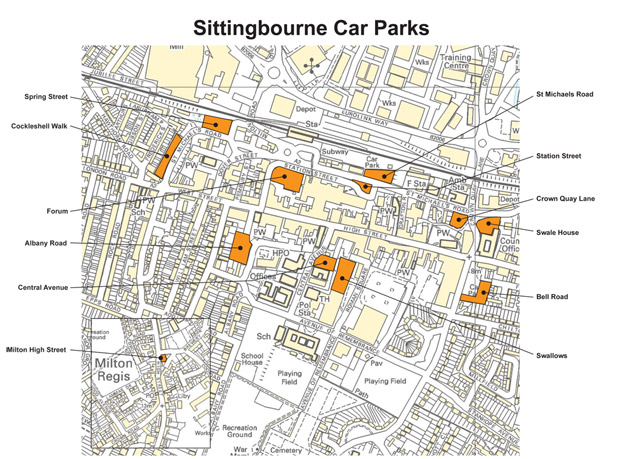 As part of the regeneration of Sittingbourne Town Centre we could see the loss of nearly all the existing car parks, albeit with some additional new provision via the proposed Multi Storey Car Park which would be located on the present Station Street car park.

What is certain is that rather than increasing provision as many people had expected the Council is actually seeking to consolidate the number of spaces. The big question is by how much?

The first phase of the regeneration proposals will see the closure of the Spring Street, Cockleshall Walk and Station Street car parks and a significant reduction of spaces in The Forum and St Michaels Road car parks.

The second phase of the plans will involve the potential closure of both the Central Avenue, The Swallows and the Councils own Swale House car parks, although this is far from clear with some documentation retaining provision and even potentially increasing provision and other plans showing no replacement provision at all.

Even the Albany Road and Crown Quay Lane car parks face big changes as they are changed from Short Stay to Long Stay in some desperate attempt to make up for the significant loss of commuter car parking.

And if commuters were hoping that the new multi-storey might be an option, I’m sorry to report that the Council has specifically stated that this will be a short stay car park.

The majority of the existing car parks will make way for housing, although in Phase 2 we will see a consolidated Council Office, Library and Community Space plus a new Medical Centre.

Forecasts show that the Council will continue with its policy of annual increases in car parking charges which currently nets the Council a profit of £228,395 per annum.

SBC keep going round and round this remodelling of the Town, they have no idea.

We all know that multi storey car parks end up as dangerous dens for the louts to hang around in, spaces will be far to small for any normal car or even when you have managed to park you cannot get out of your car.

SBC get a grip on life and start to listen to the people who reportedly voted you in!!

We need new blood in our councils and some please with some brains!!

What is going on !!!! Mmmmm lets put a multi-storey eye sore back where the original multi storey eyesore was that we ripped down many years ago lets just build a place for scumbags to hang about in ...  Nothing like the smell of a multi-storey toilet beautiful just beautiful !!!  Oh and bet your bottom dollar the spaces that they cram in will all be designed for people driving smart cars !!

Swale Council, LEAVE THE CAR PARKS ALOME. In the past we have had a multi-storey car park. No one likes them. They are dirty, dangerous and smelly. Many drivers avoid them aas far as possible.

Way to go council!  Good idea for regeneration of town center. Making it difficult and expensive to park should draw the punters in.............NOT.

Get a grip Swale Borough  Council out of town center parking is generally FREE.

Looks like they don't want commuters to live in Sittingbourne any more, we bring in the money from London that's okay I will just move & take my money else where!

Believe it when I see it. It's only been about 10 years in the planning .