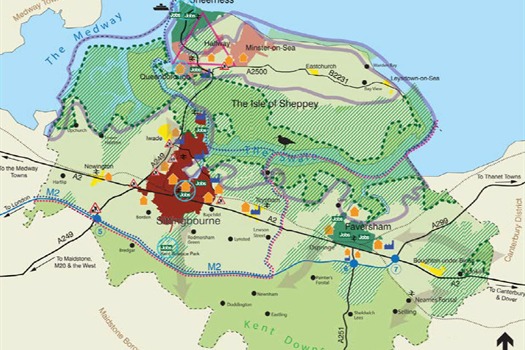 Shock as council finally reveals the true cost of preparing the last Local Plan which came in a staggering £3.6 million over budget. This totally contradicts information supplied by the council under a freedom of information request which it now appears only included a budget estimate of £819,000 (£91,000 per annum over the 9 years it took to complete) rather than the actual costs.

Now if you are wondering whether all that money was well spent, then I am sorry to disappoint because the plan which was supposed to last until 2031, was immediately ditched in favour of creating a brand-new plan to incorporate a new garden town. There is now a considerable amount of evidence that demonstrates that this was in a bid to support the expansion of the Kent Science Park, a proposal which had only just been rejected by a government inspector in reaching an agreement on the current Local Plan which was adopted on 26th July 2017.

The council have tried to convince us that the new plan is a reaction to potential increases in housing targets announced by the government on 14th September 2017, but as you will see much of the evidence we have obtained predates this announcement by some margin, so clearly this simply isn’t true.

Evidence shows that on the 18th July before the Local Plan is officially adopted a number of very senior council employees along with Cllr Andrew Bowles and Cllr Mike Cosgrove were already in discussions about getting their hands on £250 million of funding for a so-called ‘meta scheme’ which includes the completion of the Northern Relief Road, upgrade of Grovehurst roundabout and a new Southern Relief Road and M2 Junction 5a.

Given both the Southern Relief Road and M2 junction 5a were also rejected for inclusion in Local Plan, to adopt such a strategy sets out to deliberately and fundamentally compromise the council's own plan. This also inherently weakens any subsequent attempts to show impartiality on any aspect of this scheme and we have found various warnings from council employees to those higher in the chain of command about the pre-determination of any subsequent plan review.

Further evidence shows that by 24th July Cllrs Andrew Bowles and Mike Whiting had already been in discussions with Transport Minister Chris Grayling and Mark Quinn of Quinn Estates about a bid for a large scheme. Cllrs Andrew Bowles, Gerry Lewin and Mike Cosgrove, the senior management at Swale Borough Council and MP Gordon Henderson were all aware of the plans at this point.

To gain some momentum for the ‘meta scheme’ a council employee suggests that the council should use the availability of funds to encourage scheme promoters to try and accelerate things via a planning application. Shortly afterwards Quinn Estates and the owners of the Kent Science Park are invited in for a meeting where they cook up plans for a new garden town with circa 12,000 new houses. An EIA Screening Opinion for the scheme, a forerunner to a planning application followed in late December 2017.

On 26th July the council officially adopts the current Local Plan and simultaneously makes it utterly worthless as Cllr Mike Cosgrove tries to establishes retrospective authority for their actions by proposing a last-minute amendment to the meeting minutes as follows “The council welcomes MP pressing government for funding to the strategic highway network across Swale including the completion of the Northern Relief Road and Southern Link, Brenley Corner, and A249 improvements to the M2”

This is then, somehow, interpreted by the council as having a remit to pursue the construction of the Southern Relief Road, a new M2 junction 5a and any large-scale development which might accompany such infrastructure. None of which is included in the Local Plan therefore immediately rendering it redundant.

Cllr Monique Bonney who discovered the massive overspend, questions whether in fact, the council has the authority to adopt this position suggesting that “Firstly it only welcomes MP pressing for government funding. It is not in my view a commitment by the council. Secondly, the Northern Relief Road and Southern link are not and would not be part of the strategic highway network. Thirdly where would it improve air quality and fourthly where would it improve traffic flows? It shows a complete lack of understanding and garbled thinking “

On 16th August a month before the government a senior council officer is on record saying “There is absolutely no evidence for the need of 12,000 dwellings at the moment, still very uneasy about being seen to pre-determine the local plan without appropriate evidence being in place. That said we have nothing else at present to justify our Local Plan choices, so this is likely to attract a lot of flak, we need to have a way of dealing with it.”

In the same correspondence, the officer in question identifies that Peter Brett Associates LLP had already been engaged to prepare the ‘Choices for Housing Growth’ report which incorporates the new garden town approach to planning which is the cornerstone of the local plan review.

Another council officer says in email correspondence on 15th September the day after the government announcement “I think the possibility of linking a Sittingbourne Southern Relief Road into the current HIF (this is a funding bid) could be very tricky. The danger would, of course, be that this could significantly delay the delivery of the M2 Junction 5 improvements and as it stands we have no idea whether even the most expensive design would delivery enough capacity for such an approach. I assume yesterday’s announcement of the Government consultation on increasing housing targets should assist.”

This clearly demonstrates that the council planned to use the government announcement to justify plans that were already significantly advanced. Plans of such magnitude, that not only are they completely outside of the scope of their own Local Plan, but also endanger its delivery, particularly something as fundamental as the M2 Junction 5 upgrade. I find it astonishing that the council is now clearly acknowledging that the introduction of a Southern Relief Road would have a detrimental effect on traffic flows on M2 Junction 5. Kent Highways said as much some years ago but this is the polar opposite outcome for a scheme which the council had previously promoted as a traffic reduction measure for the A249/M2 junction 5.

On 20th November 2017, Cllr Gerry Lewin who is the cabinet member for planning puts out a press release in a vain attempt to convince the us that the council is very angry at the unrealistic housing targets being inflicted by the government.

That might be slightly more convincing had they not already started work on this new plan, including commissioning external consultants, which included the possibility of 17,000 additional houses. So, unless the council has a crystal ball and a fortuitous ability to predict the future, this is pure propaganda.

Rather bizarrely, the Freedom of Information request mentioned at the beginning of this article clearly states that the council planned on sticking with the annual budget of £91,000 per annum going . Given that the previous plan averaged £500,000 per annum, this is either unbelievably optimistic or financially irresponsible.

Now just one year on after the adoption of the current plan, we can reveal that the council has already spent £226,000 and has apparently given up trying to set any kind of budget for the cost of the plan review.

It would be interesting to have a calendar of all meetings and correspondence between Mrs. Bowles, Henderson and Quinn.  I believe our local MP and council leader to be corrupt, having clearly taken the time to move information to Mr. Quinn in return for kick-backs.  The first port of call would be to have all council information pulled via FoI, the second would be phone logs, the 3rd would be the bank account of Mrs. Gordon Henderson..... just saying …..

If this is true, it shows there is hidden agenda's. All persons involved she be called to account. This is truely shocking.

If there was ever an example of why we need a Government inquiry into local government corruption then Swale Borough Council has to be it. The deviousness surrounding housing planning is beyond belief.

this looks like the sort of thing the Private Eye should cover in Rotten Boroughs. Does our MP have anything to say for himself.

I feel appalled that the council wastes 4.5 million pounds on a redundant local plan but when it comes to looking after local people who are trying to keep fit by using a local gym but you take away a refund which only costs £196.000 I would think that Cllrs Bowles and Cosgrove need to do some hard thinking along with the rest of their group of Cllrs. I look forward to a reply to my comments