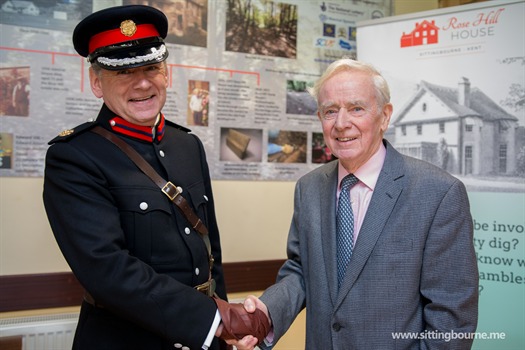 The Historical Research Group of Sittingbourne (HRGS) announced that Deputy Lieutenant of Kent, Paul Auston has agreed to become the new Honorary President of HRGS, taking over from Bill Croydon CBE, who has stepped down for family reasons.

Both attended the celebration event of the Rose Hill Project which was celebrated by the partners, community and young people on Saturday 20th May at the Gore Court Cricket Club pavilion. The handover of the role was marked at the event by Paul Auston presenting Bill Croydon with a framed painting of Sittingbourne High Street by local artist, Luther Gorf. Bill was also awarded Life Membership of HRGS in recognition of his long support to the group.

Bill Croydon’s association with HRGS began in 2004 and, in stepping down, said that “One of the best things that has happened in the last 25 years in Sittingbourne was the establishment of HRGS” to research the fantastic history of the area. He praised current and past officers and committee members for putting their “Hearts & souls into producing what I think is a magnificent and very dynamic group” dedicated to finding out the history of the area.

He also recalled the importance of some of the biggest business in the area which had supported the group but have now been lost to the area. “Big companies that have disappeared and with them their appreciation of the importance of the heritage of the area”.

This increased the challenges to keep going & he paid tribute to Richard & Theresa Emmett’s work in keeping the group flourishing and said that “it is indeed flourishing”. He remarked that it “makes such a lot of difference to the people who live here when they can feel the pride that they can have in their heritage”.

Paul Auston expressed that it was a great honour and that he felt humbled to be asked become President of the group and to take over the role from Bill, quipping that Bill who had held that role “since I was a small boy”. Paul told the audience that during his tour of the exhibits on the day and being taken through the timeline of the history of Rose Hill House, he was fascinated by the connection to Gibraltar, which had already opened his mind to further avenues known to him. He promised he would take this on as one of his first tasks for HRGS to explore the possibilities for this further line of research into the history of Rose House.

He ended by saying that he would “do my best to be a good President and I am very interested and supportive in what HRGS is doing and want to see the group prosper for the long term”.

Richard Emmett, Chair of HRGS, announced his sadness that Bill Croydon was stepping down and thanked him for his support over the years and wished him well for the future. He also welcomed Paul Auston to the role and looked forward to working with him.