Home / Blog / Iwade resident Elspeth Baecke awarded a British Citizen Award
Gordon Henderson MP has congratulated an Iwade resident who has been awarded a British Citizen Award for setting up an orphanage in Malawi. Elspeth Baecke BCAo, a former teacher at Sittingbourne Community College, set up a small charity called Smile Malawi in 2004 after watching children suffering in Africa on Comic Relief. 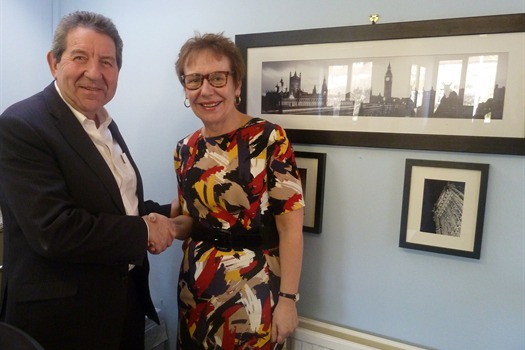 Elspeth began fundraising and construction started on the new children’s home in 2005. The doors opened in 2006 and now has 39 children aged between 3 and 20-years old.

Elspeth was nominated for a British Citizen Award by her friends and was invited to an awards ceremony in the House of Lords on 28th January 2016 to collect her medal. Unfortunately, Mr Henderson was unable to attend the presentation and so invited Elspeth to meet him at his constituency office in Sittingbourne.

“It has been an amazing journey building the orphanage and then being part of the children growing up. I now have to help the older children establish themselves independently and I’m looking forward to seeing their success. I’m really honoured to receive the award and it was great to meet Gordon.”

“The British Citizens Awards recognise everyday people who do extraordinary things for their communities, charities or other causes and I am proud that one of my constituents has won.

“Elspeth has committed a lot of her time and even re-mortgaged her house to provide funding for her charity. She is an inspirational and selfless woman.”