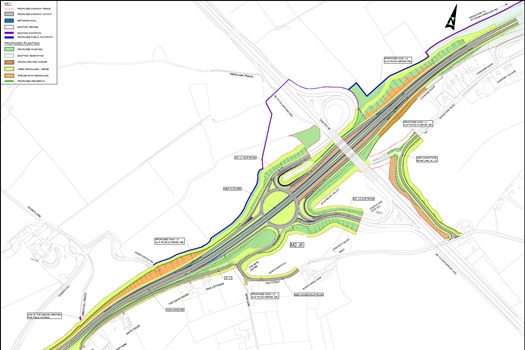 We are under strict instructions to make you aware that the design is under review pending finalising the design following engagement with the local authorities and environmental bodies.

Besides the most obvious change to incorporate a flyover across the current roundabout, the other most notable change would appear to be a revision to the Oad Street connection with the A249. 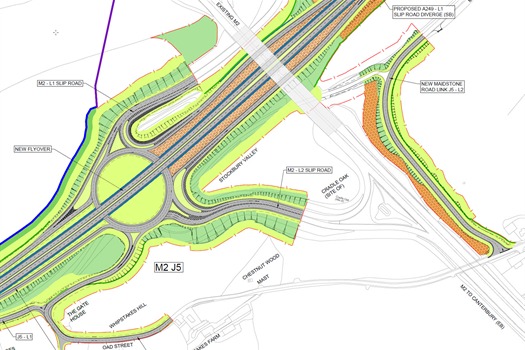 Previously this was going to incorporate a new stretch of road which swung round under Oad Street connected to the roundabout. Oad Street will still connect with the roundabout but via a smaller link very close to the A249, with a new interest spur to the right connecting properties currently served by the next junction from South Green which will be permanently closed, along with the connection from Amels Hill on the opposite side of the road.

For those looking to see what happens to the access from Maidstone Road, this remains unchanged from the previous design where it would be diverted left up the hill and connect with Oad Street.

Now anyone who travels that way will attest to the fact that the queues on Oad Street are probably worse than those from Maidstone Road at peak times and the thought of bringing both those streams of traffic into a single queue will no doubt tempt people back onto the A249 which with a flyover would probably be a better bet. 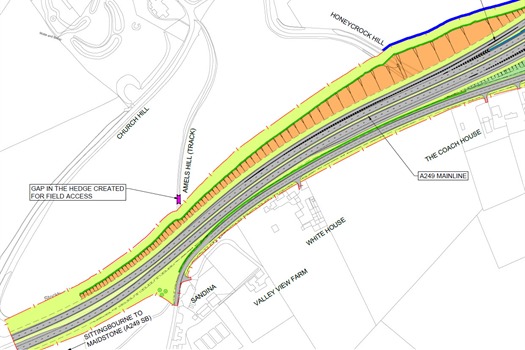 I spokesperson from Highways England told us “Following the consultation undertaken in late 2017 the responses were taken into consideration and the preferred scheme developed to include the flyover as requested by many respondents.”

“Going forward once the preliminary design is completed the planning process for M2 junction 5 will follow the route prescribed under the 1980 Highways Act.“

“The current expectations for the timeline are that publication of orders will be in early 2019 and the construction of the scheme would start before April 2020 and the scheme would be open to traffic in December 2021.”

Once the publication of orders occurs in early 2019 residents will have 6 weeks to formally object to the scheme, but please note that this is not a consultation exercise. Only in such circumstances where the objections are considered significant would a Public Inquiry be a possibility.

Highways England spokesperson finished by telling us “Although we expect to get comments and questions around these key milestones we welcome them at any time and will consider them in line with the current stage of the project. Ongoing queries should be forwarded to M2J5@highwaysengland.co.uk

In addition to a previous comment on moving the traffic queue from M2 Stockbury junction to the roundabout at the M20 junction. Quinn Estates have now submitted their planning application for a 1100+ house ‘garden’ village on land next to the County Showground at Detling plus a business park (which will probably end up as more houses at some stage) so with a possible 2000+ vehicle movements onto the A249 at this point, via some sort of underpass(?)/roundabout, the prospects of traffic congestion at this point is very high. Coupled with all the development, both residential and business, along the A249 corridor in Swale the future traffic prospects for the A249 and surround area are grim to say the least.

The application at Detling is the usual Quinn Estates offering of a medical centre (where are the GPs coming from), sports ground (no doubt a local sports club will be offered the sweetner of new facilities to support the application), hotel, country park (novel ideal of replacing open country with a country park), a school (I thought schools were sanctioned by KCC not a land speculator), not forgetting the obligatory “hub”.

I find these tiny proportional maps particularly unclear.  I would like to see a larger map incorporating all the new suggested routes, including South Street, and proposals made a lot clearer including the track currently opposite the Oad Street junction with the A249.

So the traffic queues that build up at the Stockbury roundabout will simply move to the M20 / A249 roundabout. Once the lights are installed there the queues will stretch back to Yelsted/Hucking turnings.

That will move all the rat run traffic from Oad Street to Hollingbourne Hill.

So it does nothing to remove the queues in the evening peak on the M2 coming off from London bound side.