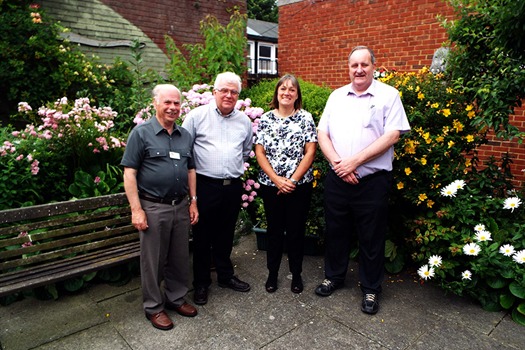 South and South East in Bloom judges Ian Fleming from Canterbury and Ian Hulf from Sidcup were welcomed to the town by Sittingbourne in Bloom Committee Members last Friday as the judging begins.

After an introductory meeting in the Sittingbourne Community Services centre in Central Avenue, Committee members took them on a five and a half mile tour of the town in a minibus provided by Let’s Go Green Cabs.

En route they visited the Milton Creek Country Park where they saw the work being done by the Friends of the Park volunteers, Regis Gate, the residential home for elderly residents in North Street where they were shown the beautiful garden developed by the residents and the Bob Fowler community allotment at Regis Crescent.

From there they travelled to Eden Village via areas worked on by the In Bloom Committee during the past year and in the Village saw the lovely planted areas developed by local residents.

Their next stop was The Oaks Infants School where pupils showed them the results of their gardening skills and their wildlife conservation areas. The final stop was at the Riddles Road allotments where local gardeners showed them the progress made since the allotments won the award of Best Allotments in the Region in last year’s competition.

Malcolm Moore, Chairman of Sittingbourne in Bloom, said that the visit had gone well and the judges had seemed impressed by what they had seen although obviously they could give no indication of how the town may have fared.

Malcolm was however optimistic that last year’s award of Silver Gilt would be at least equalled and, with a bit of luck, Gold might just be possible.

The result will be known in September when Committee Members will travel to Fareham in Hampshire to discover how favourably the judges looked upon the town.