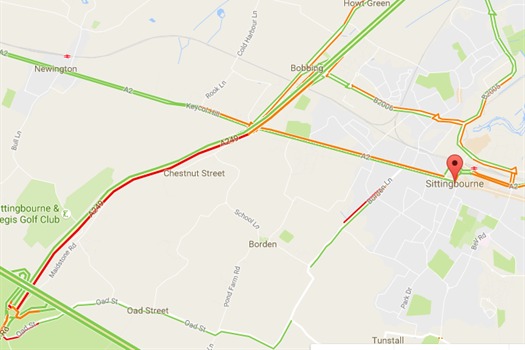 Earlier this month Highways England expressed their concerns regarding the Council’s Local Plan suggesting that the evidence produced to-date regarding the Strategic Road Network does not provide full confidence that the plan is sound.

In my opinion, the councils approach of disproportionately loading the A249 corridor with the best part of 1,200 houses which by rights should have been built in Faversham based on an even population distribution model, has directly contributed to the impossible position we now find ourselves in.

The politically motivated decision to adopt a two-tier planning arrangement within Swale, promoted by conservative councillors has placed the Local Plan in an extremely vulnerable position, which could lead to a planning free-for-all with the council spending vast amounts of money and resources defending its rather tenuous position.

The revelations are the result of a Freedom of Information request by UKIP Councillor Mike Baldock who told us "These papers show that far from submitting a competent balanced plan, Swale have knowingly submitted a mess that they fully expect to get rejected and which will simply serve to give developers the opportunity to throw more unwanted schemes into the mix. The answer is very simple - remove the Wises Lane site and you remove most of the problems. If they have to go out for further consultation, Swale must remove the Conservative's zoning policy and treat the whole Borough equally."

KCC Highways had issued warnings that the early transport modelling carried out for Swale was limited in its appropriateness for future forecasting of traffic impacts, but due to lack of funds the Council simply hoped and prayed it would work out. Unfortunately, it has come back to bite them with serious consequences for all of us.

KCC Highways have also been highly critical of the Council’s Transport Strategy suggesting that it “is very limited, focusing largely on sustainable modes and offering little in the way of tangible infrastructure improvements to relieve congestion on the A2 corridor. This is particularly relevant, given the emerging proposals for Spirit of Sittingbourne which will further impact on traffic flow within Sittingbourne.”

They also say that the piecemeal ‘fix it as we go’ approach to planning is “clearly an undesirable approach to strategically planning highway infrastructure and will make the task of infrastructure delivery much more difficult to achieve in the future.”

The problems have been known about for some time, even back in August of last year officers warned that the A249 corridor is rapidly becoming a key delivery issue for the Local Plan with the A249 junctions at Keycol, Bobbing and Grovehurst are all presenting significant challenges ahead to manage queuing traffic.

However, the A2 from Newington through Keystreet and on to Teynham is also a serious cause of concern. The additional proposed development at Wises Lane which has widely been discussed in recently weeks is a serious contributing factor, but did you know that developments in Teynham in particular Frognal Lane are flagging up potential problems with the Swanstree Avenue junction which I’m sure won’t be helped by the Stones Farm development in Bapchild.

Rather worryingly council planning officers seem to be playing a game of tactics with the Government Inspector Sue Turner who is currently assessing the Council’s plan following the end of the second public inquiry. In a bid to lay blame with the Inspector rather than accepting responsibility themselves principal planner Alan best suggest that Councillors can say “it was that pesky Inspector wot made us do it gov”.

Obviously, I cannot second guess what changes the Inspector might recommend or whether even she will determine the plan unsound which is a distinct possibility.

Such a scenario will present untold damage and the council’s alternative of a five year window before embarking on another major local plan review is only marginally more satisfactory.