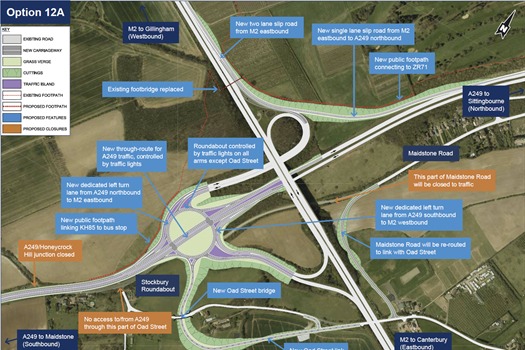 Gordon Henderson MP, Member of Parliament for Sittingbourne & Sheppey, met with Highways England officials in Westminster yesterday (Tuesday 31st October) to discuss the agency’s proposals for Junction 5 at Stockbury, known as Option 12a.

The meeting follows an earlier discussion with Roads Minister Jesse Norman MP at which Gordon expressed his opposition to the proposal because it does not provide a direct through route for A249 traffic travelling over the junction by way of a flyover.

Highways England officials at the meeting recognised local MPs and all tiers of government in Swale were united in their condemnation of Option 12a during the recent consultation and agreed to review all elements carefully before publishing their preferred option in January or February next year.

Mr Henderson also took the opportunity to raise the on-going problem caused by the traffic lights at the Stockbury Roundabout. The Highways England officials assured him that they have not ruled out switching off the current traffic lights as part of a trial if current re-programming of the lights does not sufficiently reduce the traffic jams and delays through the junction.

“I was encouraged that Highways England has taken on board the very real concerns residents and local politicians have about Option 12a. They have agreed to go away and look carefully at a number of issues I raised with them to ensure the junction will meet the immediate demands upon it and will support future growth to the economy in Sittingbourne and Sheppey and across Kent.

“I will continue to lobby both the Government and Highways England to ensure that any new scheme introduced at the Stockbury Roundabout actually resolves the daily congestion misery experienced by so many of my constituents and businesses.

“I will also monitor the changes being made to the traffic light controls at the roundabout and if they don’t improve the current situation I will press Highways England to switch the lights off. ”