A History of Sittingbourne Co-operative Society 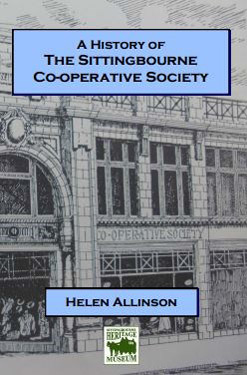 The book tells the story of the important and much respected role that the Sittingbourne Co-operative Society played in the town and surrounding area for over a century. Helen has searched newspaper cuttings, local directories and the society’s records from its founding by working men in 1874, up to its merger with the Co-operative Wholesale Society in 1988 and has concluded that this is not just the history of a shop or group of shops, but an important piece of social history that touched upon everyone’s life through its many different trading activities and social events. It mirrors the history of hundreds of other similar societies across the UK.

The secret of the success of the Co-op movement lies with the working class artisans and their families who at that time formed a large part of Sittingbourne’s population. They knew that in the Co-op movement was an institution founded by people like themselves which would give them a fair deal on their food and other necessities of life, and had their interests at heart.

Running to 84 pages, the book is divided into six separate chapters each devoted to a specific time span like the early years, expansion, during and post World War I, World War II, the post-war years and the society’s decline and merger.

It is comprehensively illustrated throughout, using both a good selection of pictures and the memories of former Co-op workers. The book is fully indexed.

The book costs £7.95 and is available from the museum in East Street and the CSI exhibition shop in the Forum shopping centre.