Home / Blog / Housing plans for town centre regeneration unveiled
One of the interesting items to come out of Monday evening’s business consultation on the town centre proposals was the detail surrounding the residential development on the land around the one way system. 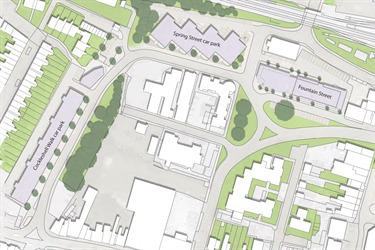 We were told that the three sites which make up the residential aspect of the first phase of the town centre regeneration plans, namely the Cockleshell Walk car park, the Spring Street car park and an area adjacent to Fountain Street will provide a total of 214 apartments.

The Spirit of Sittingbourne has begun negotiations with private rental sector developer ‘House of Home’ who would seek to attract up to 600 economically active people into the centre of town.

It is imagined that these prospective future residents would spend more money in the town centre because of their proximity to it and also predominantly use public transport. As such car parking provision for the development is strictly limited with only enough spaces for half the apartments. 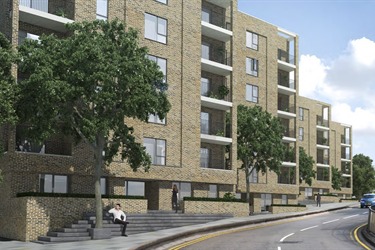 The apartments which feature yellow stock brick as a reference to Sittingbourne’s industrial past and vary between 4 and 7 storeys in height with recessed balconies. Cockleshell Walk car park will consist of 61 units, the Spring Street car park 88 units and the Fountain Street plot has 65 units. Access to all apartments is gained from the rear of the buildings, which is also where the limited car parking spaces are to be found.

House of Home have a fund of around £150 million pounds to create what is claimed to be the largest scheme of its kind in Kent.

The apartments would be for rental only apparently be designated into sections by age groups, families and people who work night shifts etc.

It was made clear that the entire regeneration hinges on the residential development and without it there will not be any regeneration of the town centre.

Business owners present at the event, were I think sceptical, about the degree to which these future residents would use local amenities and also on the likely hood of them not owning a car.

Personally I find it hard to believe that the landlords will be able to segregate tenants in the way presented here and ultimately I can’t see them turning down a prospective tenant on the basis of age, whether they had a car or worked a night shift. It simply sounds too fanciful and unrealistic in the long term, but I am happy to be proved wrong.

It’s just my opinion, but I was definitely underwhelmed by the appearance of the development from the slides shown. I think I would have preferred something more contemporary, rather than dare I say it, something that looks like an inner city development of the past. Perhaps the mock-up’s don’t do the development justice, and design is a hugely personal choice after all.

This regeneration seems typical of the current thinking of the council - that is build more houses, may one enquire where all the shoppers are going to park their cars if all the central car parks are built on, how they are going to get to the multi story carpark if and when it is built, bearing in mind the last multi story carpark was a magnet for all sorts of unsavoury characters, lets be honest with the planners we seem to have got it is easier to travel to Faversham, Bluewater or Ashford than get into the centre of Sittingbourne for shopping.