Home / Blog / Prolific local author John Clancy publishes a new book on Gillingham
When John Clancy’s book for Amberley Publishing, Kent’s Seaside Resorts Through Time, came out in 2012, the Sittingbourne author vowed it would be his last one for the publisher. He explained it was simply a question of costs. Each book in this series requires about 100 old postcards and pictures, and whilst many can be purchased for as little as £2 to £3 each, some cost upwards of £10 to £12 and more. It depends on how many people are bidding for a certain postcard and how much they want it. Royalty payments simply do not meet the costs. 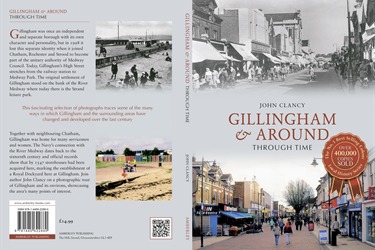 However, John soon forgot this when he had the idea to write yet another for the series, making this his sixth one. In this book, Gillingham Through Time, he revisits Gillingham where he lived for much of his working life from 1965 to 1997.

What made this book appealing to John was that there is much scope as the town has grown considerably over the years, from its humble beginnings as a small fishing hamlet on the bank of the River Medway, to the large borough it later became incorporating Rainham, Parkwood and Wigmore. Through a selection of carefully selected pictures and well-written accompanying captions, all is revealed in John’s book. And even if you are not familiar with this part of the Medway Towns, John believes you will still find the book a fascinating read.