My uncle Len, one of Sittingbourne's great wartime heroes 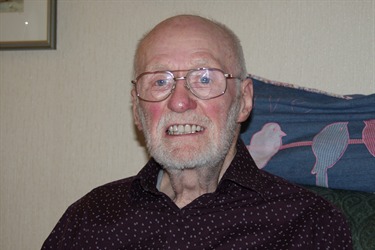 Len was my favourite uncle, my father’s youngest brother in a family of ten. He was born in 1914 in Gibson Street where he lived with his parents, Horace and Emma Baker, until they moved to 102 Charlotte Street. This is where, as a young boy, I went on most Sunday evenings with Mum and Dad to visit my grandparents. We called this “going round home”.

In 1939 Len was mobilised in the army joining the 2nd Batallion Oxford and Bucks Light Infantry. I remember him in his ‘twenties on leave – a tall, handsome, intelligent man with a commanding presence. Len married Irene Allen, a local girl, in 1941 just three years before he died. Their marital home was in Murston but I met her during my Sunday visits to Charlotte Street. They had no children. 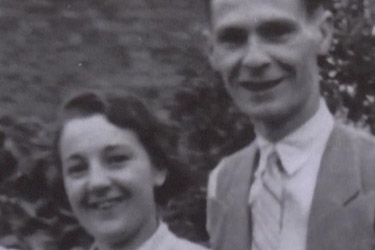 I clearly remember writing to Len when his unit was stationed at Ballycastle in County Antrim. In 1943 Len was drafted from Northern Ireland with his regiment to Italy, initially Piedmont, for reinforcement of the Second Front. The Oxford and Bucks Batallion was transferred to the 2nd Batallion Kings Liverpool Regiment which had been decimated by heavy casualties. Corporal Len Baker was section commander of 8 Platoon A company.

During the summer 1944 thousands of Allied soldiers fought their way north in Italy with the Germans in full retreat. My story now relates to a lovely hilltop village in Tuscany, San Leolino, which with other villages in the Commune suffered terrible atrocities in July. 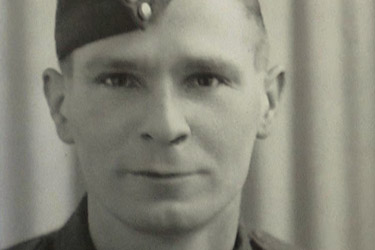 The German troops were from the Hermann Goering Parachute-Panzer division, one of the toughest units in the German army who were on the point of being deployed to the Eastern Front. They had a reputation for courage, but also for extreme brutality. They had been involved in the massacre of hundreds of civilians in the area (including San Leolino) and after their arrival in Poland were involved in the massacres of the Warsaw Uprising. They were subsequently obliterated by the Russians.

The final advance of the Kings Platoon in Tuscany began on 9th July. After the horrific wounding and disabling of both the Platoon Commander and Sergeant it was Corporal Baker who led the advance patrol into San Leolino on 16th July when they liberated the village. Len and the men of “A” Company had been able to ride on tanks during most of the advance – the Kings Regiment was supported by the Canadian 11th Armoured Regiment. There had been no sign of the enemy all day. Len and his comrades dismounted from the tanks and attacked the German position at San Leolino. It was dusk and they had to attack up a steep hill strewn with mines, into machine gun fire and grenades. It was at that point that Len met his death. He was killed- perhaps thankfully- instantly when he stood on a concealed landmine.

I remember being told by grieving relatives shortly afterwards that Uncle Len had been killed when he stood on a landmine while leading his patrol. Only in recent years have I become aware of awesome details – both of Len’s legs were blown off when he was killed !

Charles (“Chas”) Cooper who had been wounded so badly by shrapnel and incapacitated during the advance recovered and continued to serve his regiment loyally in other sectors for many years becoming a Warrant Officer.

Following demobilisation Chas emigrated to south-east Australia where he still lives in a “sheltered accommodation” village. Recently I was told that Chas now aged 93 has married for the third time and is still “a bit of a lad”! The point of explaining this is that I have had the privilege of talking with him on the telephone and receiving letters about his wartime experiences. Concerning Len’s death he said that immediately afterwards “I did write his mother a few lines of condolence, with several others also adding a few signed lines. How could I tell her the true mutilation of her son, only the blessing that it was instantaneous and he did not suffer. He was the leading section that night to hit the famous Hermann Goering Regiment holding San Leolino, their last stand in Italy, being withdrawn and later decimated on the Russian Front”. 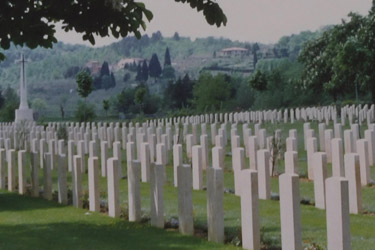 Len was buried in the Commonwealth War Cemetery at Arezzo, some 30 kilometres from San Leolino. His grave bears the epitaph: FROM BATTLEFIELD TO HEAVENLY REST THEY TOOK MY DARLING ONE OF THE BEST. These moving words were chosen by his mother. My grandparents’(Horace and Emma Baker) grave is in Sittingbourne’s Old Cemetery. The headstone bears this same memorial to their son, a fine heroic soldier who, on 16 July 1944 aged 30, died for his country.

In San Leolino Corporal Len Baker is honoured as their great wartime hero and each year in July there is a commemorative event. This is the village where he gave his life for their liberation. In 2014, seventy years after the event, a very special Commemoration is planned . I cannot attend (as they hoped ,being the oldest living relative) but my son Christopher, born in Sittingbourne in 1954, and Wendy his wife will represent the Baker family taking as well the good wishes of Len’s home town Sittingbourne.

Hello, I am Lucy Baker, (now known as lucy bakerfield) the granddaughter of Les Baker, Lens brother, born in 1910.

It is lovely to see photos of the older generations and to read details of a huge part of our family history. I once lived in Charlotte street and now live in church street, my mum always reminds me of the history this area holds within the baker family.

I will spare a thought for Len today and feel proud to have a relative who showed such bravery.
Lucy.

Very enthralling , listening to Corporal Deans exploits you can understand why his Family are so proud of him. Dennis Baker gave a good and detailed description of the events of that day. Sadly Corporal Dean lost his life that day but the villagers have never forgotten him.

Thank you Dennis Baker for a most memorable evening.