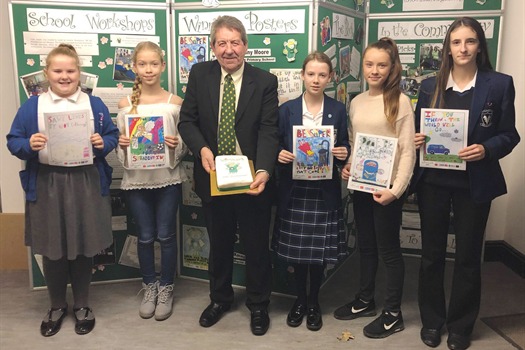 Local charity, Litter Angels, has celebrated its 10th anniversary at a reception with trustees and previous winners of the annual anti-litter poster competition in attendance.

Litter Angels was created in 2008 by Gordon Henderson, MP for Sittingbourne and Sheppey, to create, through education, awareness about the anti-social nature of litter and its effect on our environment.

The reception held on Friday 23rd November at Little Potters in Sittingbourne was to celebrate the charities achievements over the last ten years, the main ones of which include having a children’s storybook published, installing five litter bins across Swale and hosting hosted nine annual anti-litter poster competitions, which this year expanded over four constituencies across Kent.

Mr Henderson was joined by the charities trustees, representatives from the charity’s main sponsor, McDonald’s, and five previous winners and their families.

‘It was great to celebrate what the charity and its volunteers has achieved over the last ten years. It was good also to catch-up with the previous winners and find out what they are doing now.

‘Unfortunately, the first ever winner was unable to attend because she was at work, which was a scary thought!

‘There is still a lot more I want the charity to achieve, including having a second children’s book published and expanding the anti-litter poster competition to more constituencies across Kent.’