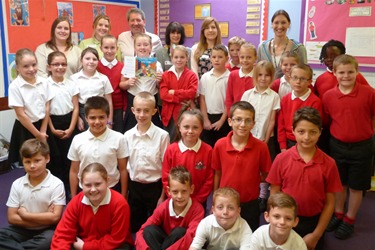 Gordon Henderson MP with the team of Litter Angels volunteers and the year 5 pupils of South Avenue Primary School, Sittingbourne


This year’s poster theme is to not throw litter from vehicles.

A team of Litter Angels volunteers has so far visited 12 primary schools across Sittingbourne and Sheppey and has another 8 to finish before the Litter Angels awards presentation, which takes place on Wednesday 12th November 2014 at 4pm in the UK Paper Leisure Club in Sittingbourne.

Litter Angels was set up by MP Gordon Henderson, to raise awareness of the effects of litter on the environment.

The workshops include a Litter Angels presentation, a reading of the Litter Angels story called The Almost Twins and the Litter Angel, which has now been published into a 34-page book, a talk from a guest speaker and a lesson during which the children design anti-litter posters to be entered into a competition. The winning poster will be displayed in the car parks of the three local McDonalds restaurants.

“This year Litter Angels will have been to more primary schools to run workshops than in any other year, which is very encouraging because it shows that more schools are using us to help educate their pupils to not drop litter.

“I am delighted also that we can now read the official Litter Angels book during the school assemblies, which is also now available to buy from the Litter Angels website.”