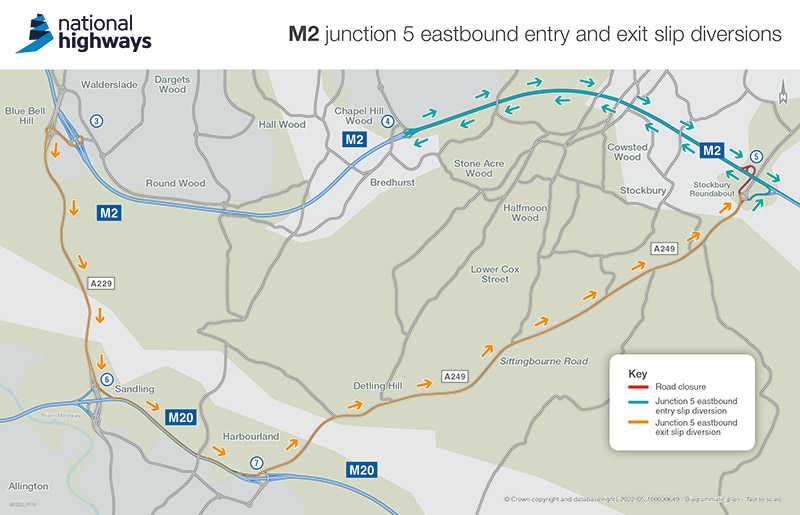 Coastbound from Stockbury roundabout (via Gillingham)

To join the M2 eastbound during the closures, use the M2 westbound from Stockbury roundabout to travel to junction 4 (Gillingham) and return. This will add approximately 10-12 minutes onto the journey time according to Highway England.

Travelling to Sittingbourne coastbound (via M20 / A249).

Drivers travelling eastbound (towards the coast) will need to leave the M2 at junction 3 (Chatham) and use the A229, M20 and A249 to reach the Stockbury roundabout. This will add approximately 15 minutes onto the journey time.

If you miss junction 3, you can travel to junction 6 (Faversham) and return to junction 5 (Sittingbourne) using the westbound carriageway, which will add a further 25 minutes.

The other alternative not mentioned by Highways England is to leave the M2 at junction 4 (Gillingham) and travel along Hoath Way and join the A2, although that is going to be tricky depending on the time of day. 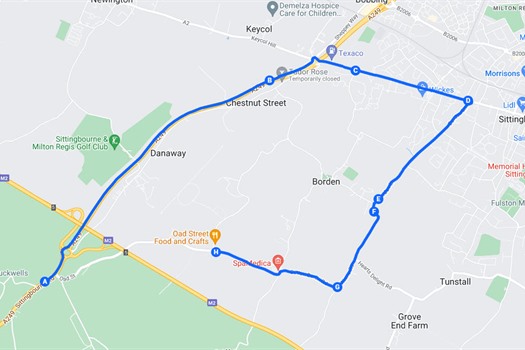 They will also be closing Oad Street, between the A249 and Woodgate Lane, from Monday 5 September until Monday 10 October, to finish our widening work started in the earlier this year.

Drivers travelling on the A249 northbound from Maidstone will need to cross the Stockbury roundabout, continue north on the A249, use Key Street roundabout, take the exit for the A2, and use Borden Lane to access Oad Street.

The businesses on Oad Street, such as the café and the butchers, will remain open as usual, and can be accessed via the diversions above.

Who works out the extra time for these diversions! Someone in an office on a computer and who doesn't know anything about the traffic In this area! Bluebell Hill, junction 3 is extremely busy on a normal day with traffic lights on roundabout which delays movement,

A2 from Gillingham to Key Street roundabout is stop start and Newington is a bottle neck due to narrow road.

How is this going to work? Sitting in traffic jams, with high emissions from vehicles, and extra fuel used!