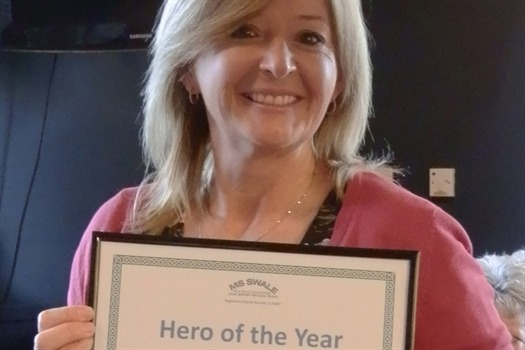 MS Swale declared Helen Caston as their Hero of the Year for overcoming her fear of heights to complete the KM Charity Abseil raising funds for the group.

Helen Caston’s father is affected by Multiple Sclerosis and knew how important the MS Swale group is to him and others in the area. A small local charity, MS Swale work tirelessly to raise funds to support local people affected by MS, their families and carers.

Helen has a fear of heights but volunteered to take part in the KM Charity event, to abseil down a 100 foot housing block in Maidstone. The abseil was originally scheduled to take place in March, but during the equipment preparation high winds were experienced causing some damage which resulted in the event being cancelled on safety grounds. Not the best news for someone scared of heights!

Determined not to let the group down, Helen completed her abseil at the rescheduled time in October, cheered on by family, friends and supporters from MS Swale. Helen raised in the region of £1,000 for MS Swale.

Helen and her husband were honoured guests at the group’s Annual New Year Lunch held at the Woodstock Club, where she was surprised to be named "Hero of the Year" by Brenda Fathers, Chair MS Swale. Presenting her with a framed certificate Brenda said "Abseiling down a 100 foot building, when you are scared of heights, to help others is a wonderful achievement".

MS Swale, is an independent registered charity, offering support to anyone in Swale with Multiple Sclerosis and those affected by someone with MS. MS Swale offers regular monthly meetings, group exercise classes, Para-Bowls, outings, social events and regular newsletters, as well as information and support. New members are always welcome.