Home / Blog / New book hopes to raise much needed funds
A new book entitled a 'Short History of the Court Hall and its role within the town of Milton Regis’ is the brainchild of local author John Clancy who offered the idea of the book to the Friends as a way of raising money. 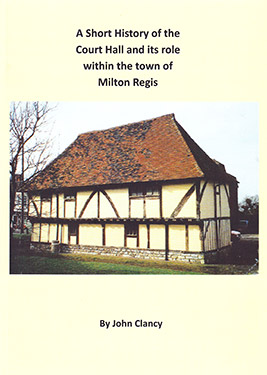 The book is dedicated to the memory of the Nicholls family to whom Milton is indebted for having saved the Court Hall from demolition.

Following the demise of the manorial system of local government in the 1920s, the building was declared to be surplus to requirements when a new town hall was built, so Sydney Nicholls, the town’s last Portreeve purchased the empty, derelict building for £75 and set about restoring it. Sydney died in 1945 and the Court Hall was passed on to his son, Arthur, before being sold to Milton town councillor Tommy Buggs in 1949 and he in turn donated it to Sittingbourne and Milton Urban District Council.

Treasurer Mike Nicholls offered to jointly fund the printing costs with his sister, Janet Halligan by way of a tribute to his family’s efforts in saving the Court Hall.

John Clancy said, ‘What makes this building so special is that it dates back to c.1450 and is one of Swale Council’s most important historic buildings. Most towns of any size and importance would have had a building like this in the Middle Ages but today only two are known to have survived; the other is at Fordwich near Canterbbury.’

The book runs to 36 pages and is profusely illustrated throughout with many of the pictures in full colour and costs £5.

You can purchase the book at the Sittingbourne Heritage Museum in East Street as well as the CSI exhibition shop in the Forum. Alternatively it can be purchased directly from the Friends secretary,
Paul David on 01795 471876.