Peter Morgan made Freeman of the Borough

Home / Blog / Peter Morgan made Freeman of the Borough 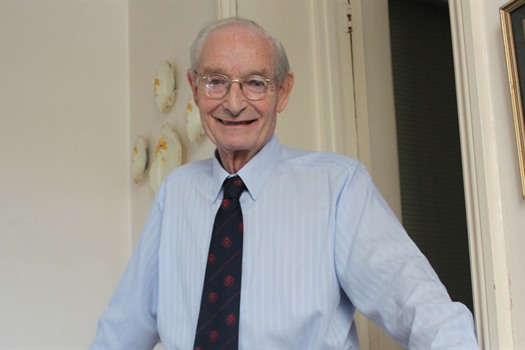 A popular former councillor from Sittingbourne has been made a Freeman of the Borough of Swale.

Peter Morgan, was given the honour at a special meeting of the council last night, having been nominated by the council leader, Cllr Roger Truelove.

“In my long time associated with this council, I cannot think of anyone who has represented the sense of service with greater distinction than Peter Morgan.

“Honouring him sets a high benchmark for us now serving on this council.

“A few years ago, when Peter fell in his cellar at home, he had to go into the Memorial Hospital. After visiting him there, I put a short message on a Facebook page to let people know he was progressing well and the public response was overwhelming.

“In wishing Peter well, a multitude of people recalled their lifelong thanks to him, for all he had been to them as a councillor, but also in the wider community and strikingly as a teacher.

“Peter is a Welshman, with a gift for public speaking, and came to Sittingbourne in 1948 and made it his lifelong home.

“He was first a teacher at the Milton Butts and then at Westlands School.

“He was elected to the Sittingbourne and Milton District Council in 1962 and campaigned for years for council recognition of the Citizens Advice Bureau.

“He became the first Liberal Mayor of Swale in 1987 and Chair of Kent County Council in 1996.

“Many words are abused these days and one of them is legend. But even so, Peter Morgan’s service to the community is legendary.

“Peter put service first and politics second. His career is an example and inspiration to us all and I am pleased members unanimously supported the call to honour him as a Freeman of the Borough of Swale.”

Peter joins other Freemen of the borough such as Bob Geldof KBE and Paralympian and TV presenter Steve Brown.