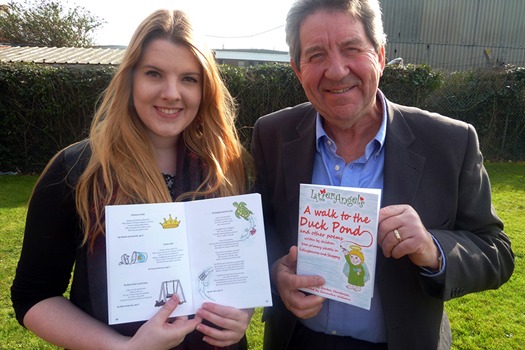 Little poets across Sittingbourne and Sheppey have had their anti-litter poems published into a book.

Local charity, Litter Angels, ran a competition towards the end of last year, alongside their annual anti-litter poster competition, encouraging primary school children to write a poem about litter.

A number of poems were chosen from each of the 10 schools that took part. The book of poems was then compiled by Gordon Henderson, the Chairman of Litter Angels, and illustrated by Litter Angels volunteer, Samantha Williams. The published book is now available to buy and has already sold 67 copies.

“I would like to thank all the children who took part in the competition and congratulate all the winners who have had their poems published. They might not all be little Byrons or Wordsworths, but their enthusiasm and commitment show they understand the harm that litter does to our local environment, which is the awareness the charity tries to achieve.

“I would like to thank also the talented Samantha Williams who beautifully illustrated the book.”

“I was very impressed with both the quality and quantity of poems we received. It was very easy to illustrate every poem when I was presented with such original ideas. The hardest part was deciding which poems made it into the book!”

To buy a copy of the poetry book, which is priced at £5.99, please contact Litter Angels on 01795 423199 or download an order form from their website: www.litterangels.org.