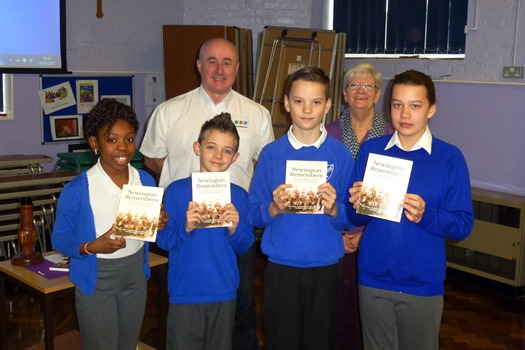 Staff at Newington CofE primary school have a new local dimension to their teaching of World War One after being given copies of Newington History Group's (NHG) recently published book Newington Remembers.

The book details the social and military lives of the 140 villagers who fought in the war, including the 31 who died.

Fifteen copies were presented to the school during a special assembly on Tuesday, March 24.

Trudi Godfrey, the head of school, in thanking NHG, said: "Most of the men included in the book would have attended this school only a few years before they went off to war. They would themselves have been taught history in the hall where we held our presentation.

"The children's studies of the Great War will be enhanced through these books. It'll bring it home to them how their community was affected. They'll read about where these men lived and then be able to see their houses and where they worked.

"As a school, it would be interesting for us to work out if any of our pupils are related to the men mentioned in the book and if they live in the homes they occupied."

Apart from photographs of the soldiers, the book includes one taken when some of them were pupils at the school in 1898.

The books were handed over to four members of the school council by two of the three authors, Dean Coles and Thelma Dudley. Debbie Haigh, the other author, was unable to attend.

Mr Coles, the chairman of NHG, said: "We are delighted to donate copies of our book to the school. An important part of NHG's work is to pass on our knowledge to the next generation and to encourage interest in their village and its heritage."

NHG is interested in all aspects of the history in the village and surrounding areas. The group meets on the second Thursday of the month and welcomes new members and guests.