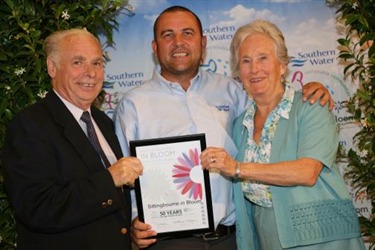 The awards were presented by BBC gardener Chris Collins at a ceremony held at the Brighton Football Club stadium at Falmer and the Certificate was received by In Bloom Chairman Malcolm Moore and Secretary Brenda Moore.

Malcolm said he was happy and a little relieved that an award had been received. It had been a difficult year as the In Bloom Committee had lost its co-ordinator just before the judging date and the town this year seemed to be suffering from unusually high levels of litter pollution, a fact commented on by the judges.

The judges had however been impressed by the Milton Creek Country Park and by the Riddles Road allotments which were looking very good and no doubt helped to swing the balance.