Home / Blog / Sittingbourne in Bloom unveils winning design for station roundabout.
Ben Clark from Grove Park Community School was awarded first prize in the annual competition to design a floral display for the roundabout outside the train station in St Michaels Road. 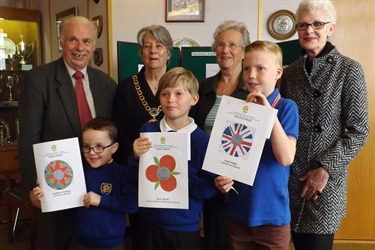 (Children in the photo from left to right are Andrew Dutton,  Ben Clark and Jack Mills)

The prizes and certificates were presented by the current Mayor, Cllr Mrs S Gent on Monday.

This year’s winning design is based on a poppy theme which will help the town commemorate the 100th Anniversary of the start of WW1.

Every year primary school pupils across Sittingbourne are invited by Sittingbourne in Bloom to submit designs for the floral display.

This year as Sittingbourne in Bloom celebrates its 20th anniversary; Ben Clark will be invited to attend a formal ceremony during May where he will see his winning poppy design spring to life.

Sittingbourne in Bloom chairman, Michael Moore told us that

“there were over 500 entries from six schools and the kids are really keen and come up with some ingenious designs.”