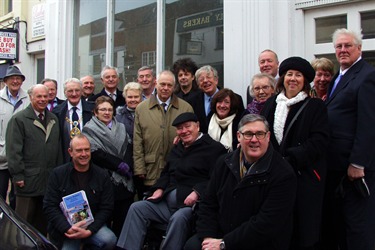 It compliments others that appear on various buildings throughout Sittingbourne High Street’s historic core, mostly former inns and hotels, giving information about each one’s past use. Most of these have been erected by the Society in order that the Town’s past is not forgotten.

This additional plaque, commemorates it as being the childhood home of Julia Spicer, the benefactor of the almshouses in Bell Road that bear her name.

For many years people questioned who Mrs Spicer was and why she bestowed such a generous gift upon the town, but she remained a woman of mystery, that is until historian John Clancy took up the challenge to discover the identity of this enigmatic lady. His findings were subsequently published in a book published by the Heritage Museum. 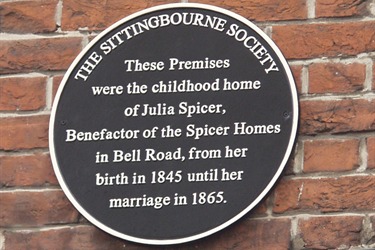 One thing revealed by John’s extensive research was that 59/61 High Street was the home and business premises of Mrs Spicer’s grandparents and that from 1845-1865 she lived here with them and her widowed mother. John thought it would be appropriate to add another plaque to those already in place and called upon the Sittingbourne Society to help him realize this idea.

As the Spicer Homes are currently administered by Amicus Horizon, an approach was made to them to part-fund the cost of the plaque, which they gladly agreed to do. The balance of the cost was then met by the Sittingbourne Society who placed an order for the plaque. With all the necessary permissions in place, there remained just one more expense, that of installation, which was one of the most difficult to overcome due to the height that the plaque had to be installed to clear the front windows and fascia of the building.

For a long time it seemed like no one wanted the job of installing the plaque until County Councillor Mike Baldock, a member of the Society, not only offered to pay the installation cost from his community budget but also organized the actual operation which was carried out by County Council operatives who were engaged in other work in the High Street and had the requisite equipment available to carry out the work.

Because of the plaque’s location, high up on the frontage of the building, it was difficult to have a conventional unveiling ceremony so, instead, the Sittingbourne Society arranged a small reception which took place at Phoenix House, Central Avenue.

Commenting at the reception, John Clancy said he was most grateful for all the help the Sittingbourne Society had given in undertaking this project, bringing his research to a satisfactory conclusion. Without their taking up the task it is doubtful whether Julia Spicer’s plaque would have appeared on her former home. But in looking around the High Street, John added, ‘There are many other buildings and sites in the High Street to which similar plaques could be added. Who knows what the future holds?’