Sowing the seeds of success 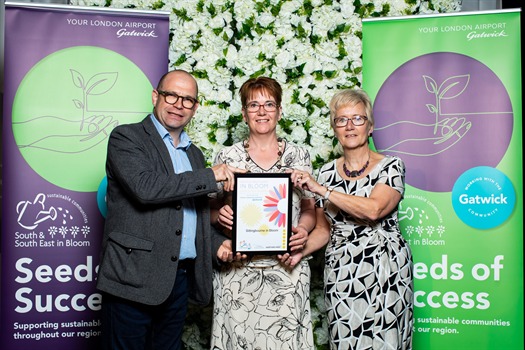 Sittingbourne in Bloom scoops gold award in the large town category for a third year in a row. Friday 13th proved to be a lucky day for hard working local volunteer gardeners, as they were recognised and rewarded at the RHS South, South East in Bloom Awards.

Other areas in the borough also fair well with Faversham being awarded silver gilt, and Queenborough and Rushenden received a bronze award. Eastchurch wowed the judges with their entry and received gold in the village category for their first-time entry.

Swale Borough Council’s open spaces apprentice, Ryan Gevaux-Ross, was recognized for his efforts in the borough and was awarded the RHS young champions accolade.

“Volunteers across the borough can be proud of their hard work in making Swale look its best. Gaining recognition at the RHS South, South East in Bloom Awards is well deserved for everyone involved, not just to the groups of volunteers but also schools, scouts, churches, halls, businesses and private gardens-as the judges grade our towns on everything they see on their visit. The judges were particularly impressed with the level of engagement and involvement from schools in Sittingbourne.

“I’d like to congratulate everyone who gives up their time to brighten up their towns, villages, parks and neighbourhoods to make them something which everyone can enjoy.”

The awards took place at the Amex Stadium, Brighton on Friday, 13 September.

Local winners in the RHS South, South East in Bloom Awards were:

Good to hear good news about Sittingbourne!  Well done to the In Bloom team.