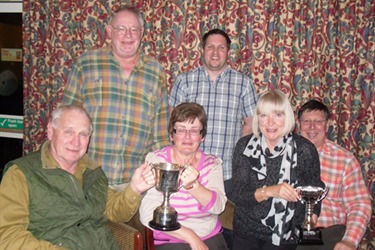 The quiz team from Fruiterers Arms, Rodmersham, have secured another victory winning the Sittingbourne Quiz League for the second time in succession with a total of 26 points, and the knockout cup by 1 point.

The Awards evening and Fun Quiz was held at Woodcombe Social Club on Tuesday 15th April.

Second in the league was The Dover Castle, Teynham, with 20 points. The knockout runners up were The Fox & Goose, Bapchild and The Fun Quiz was won by The Park Tavern.

A plaque was presented to Keith Fuell who organised the league for many years until 2013.