The Vision is about to become a reality or possibly a nightmare.

Home / Blog / The Vision is about to become a reality or possibly a nightmare. 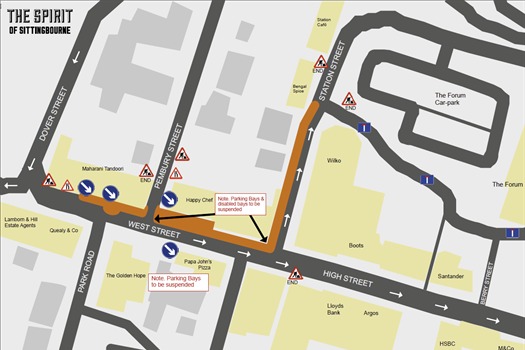 It will hurt, take some time and require sacrifice, yes you guessed the long-anticipated roadworks ahead of the main construction work for the regeneration of Sittingbourne’s town centre are about to commence.

The Spirit of Sittingbourne regeneration project is set to shift up a gear from vision to reality this summer, with site set up for the big box retail site off Eurolink Way underway and the beginning of planned roadworks to facilitate construction of the new leisure quarter.

The remaining legal conditions are due to be met by July 5th 2017 for the retail site and shortly afterwards for the leisure site, meaning work can begin on site this summer.

Here is a list of roadworks that are known about at this point in time. 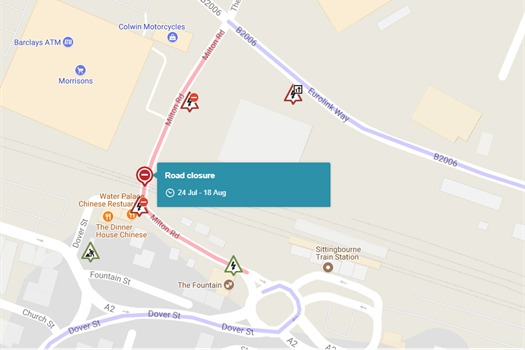 Essential service works by UK Power Networks will result in Milton Road closing for a maximum of three weeks or 4 weeks depending on who you believe. At the same time there will also be roadworks on Eurolink resulting in a lane closure as you approach the traffic light junction.

We are informed that the construction of the retail units will be complete by March 2018, when Costa Coffee, Home Bargains and Food Warehouse from Iceland take up residence.

Roadworks to facilitate the construction of the new leisure quarter will take place in four phases, with the first phase kicking off at the beginning of August and finishing by the beginning of December. 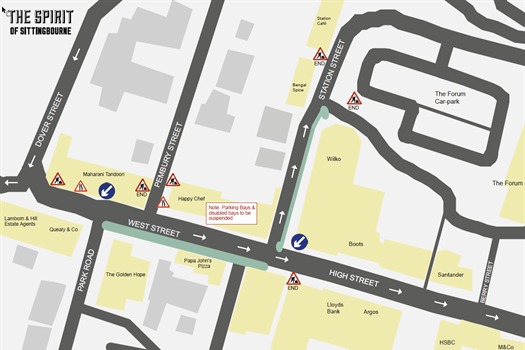 To explain this further West Street and a section of Station Street adjacent to Wilko are going to be widened in two phases dealing with one side of the road at a time so as to maintenance one way traffic as it is now.

Eventually, at some point this section of West Street and Station Street will become two-way to provide access due to Station Street becoming a dean end finishing in front of the parade of shops. They have given no details when this will come into force. 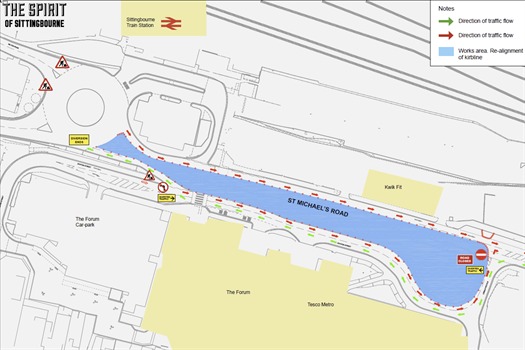 The more noticeable roadworks will be the west bound traffic on St Michaels Road, that is heading up from the Council Offices to the Train Station. This will effectively be diverted onto the other end of Station Street (the road that services the Forum Shopping Centre Car Park from St Michaels Road).

I have to speculate here as details are scarce and we were excluded from the press briefing, but it does appear that the current no right turn, used by taxis and buses will remain in force meaning that traffic leaving the Forum Car Park will only be allowed to proceed in an easterly direction crossing through the no doubt stationary traffic queuing for the roundabout.

Rather optimistically the Spirit of Sittingbourne say “Whilst these works will not result in significant diversions to traffic, we do anticipate some disruption, so drivers may want to allow a little extra time for their journey.”

St Michaels Car Park will be completely closed from 1st August to 29th September 2018 whilst they break through the new entrance/exit into the Network Rail car park. You are advised to use the long term car parks at Spring Street and Cockleshell Walk as an alternative, although the Council is adamant that this will cause little inconvenience as the car park is mainly used by Council employees, who presumably will not be inconvenienced.

Details of the next three phases of works have not being officially released and none of the details below are signed off and the dates may vary by the time we reach this point. However these works were openly discussed at the full council meeting, so I'm repeating what I've managed to find out so far.

Phase two, anticipated to be the most severe of all the roadworks, will begin in the New Year with work on the Multi Storey Car Park scheduled to start in January 2018 and the Leisure quarter in April 2018.

Completion of the second phase of works will fully release the leisure quarter land, meaning work can begin on the new Light Cinema and new restaurants, including Pizza Express and Wildwood.

These works will last for approximately 12 weeks.

We understand that will involve works on St Michaels Road and Dover Street which will become 2 way and that these works are likely to occur during the night. This is due to last approximately 11 weeks.

“After a thorough process to ensure this vital regeneration project could go ahead, we’re now looking forward to realising our vision for Sittingbourne town centre’s future, benefiting local people through new leisure and employment opportunities.”


Rob Sloper of Spirit of Sittingbourne:

“A lot of work has gone into ensuring plans for the regeneration of Sittingbourne reached this stage. We’re delighted that we’re now able to move from concept to construction this summer, with work on the ground bringing the benefits of our development to the local area.”

We live in Grove Park Area. We try not to go into Sittingbourne on the A2. We have had nearly a year of total mess and what has improved???? A new round about at the station where the old one was and extra traffic lights.And a big new car park. What a shambles.  Traffic congestion is still bad. Who in their right mind would want to come to Sittingbourne for shopping.????

Can someone please explain to me how HGVs (because currently we have a great deal of these following the A2 route) are expected to follow the route through St Michaels Road once they divert the traffic?

Or are they going to miraculously finish the northern relief road in time to take all of the HGV traffic away from the center of Sittingbourne?

Just one other comment, shall we all just not leave our homes when (as it so often does) the M2 is closed due to yet another accident near Faversham and everyone has to use the only other road that leads down that way . . . . . . The A2 through Sittingbourne!!

I suppose one way of describing this project would be: a scale model of the M25 in rush hour only with buildings.

Still cannot see how this project, with all the money it is costing, is actually going to lure people away from Hempstead Valley/Bluewater etc. It seems to be more for the financial benefit of developers plus the land speculators who will be building the flats on the former car park land.

Ccompletely agree with previous post. I moved from Medway to sittingbourne 6 years ago and I couldn't believe the traffic in sittingbourne. I thought Medway was bad. These roadworks etc are going to be a nightmare. Also the new eurolink 5 by great easthall is horrendous. How on earth the council think it's reasonable and practical to put a large industrial site in new homeowners back gardens!  its beyond a joke. And without thinking about the road infrastructure first is just irresponsible. You think it's bad now?? Just wait! Moving from sittingbourne asap

As Cllr Mike Cosgrove, Cabinet Member for Regeneration at Swale Borough Council says: "we’re now looking forward to realising our vision for Sittingbourne town centre’s future". Nobody else is looking forward to the already gridlocked town being made worse by their vision!

There may be rubble ahead!

Have any of these idiots on the council actually driven through Sittingbourne lately?! The place is already gridlocked! I drove and worked in London for years , and can honestly say that this town is just as bad for congestion! How can all these new homes and shops be allowed without the roads and infrastructure to support them? No one is going to go to shops that take an hour to reach from the same town! Totally and utterly had enough of living in this Town!