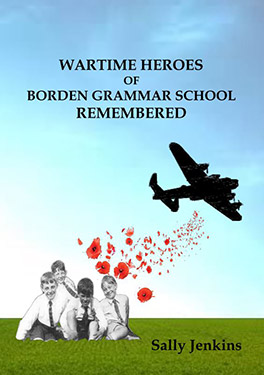 Sally Jenkins’ new book “Wartime Heroes of Borden Grammar School Remembered” is the result of extensive research into the stories of those Old Bordenians who served and in some cases gave their lives in armed conflict during the 20th Century.

The history of the school is described and it documents the impact of the World Wars on the life of Borden Grammar School. There is already great interest in this research from Old Bordenians, their relatives, and the community in general.

The illustrated book of 250 pages, published by Sittingbourne Heritage Museum will be launched on Saturday 12th March 2016 at the Heritage Hub in the Forum Shopping Centre.

Sally will be on hand to sign copies of the book during the launch and it is hoped that it will be on sale to Old Bordenians at the Annual dinner on 5th March.

Sale price will be £7.95 of which a proportion will go to the R. British Legion

The book has been printed using funds from the Swale Borough Council’s WW1 commemorative grant scheme and from the Council’s Members Localism grants.