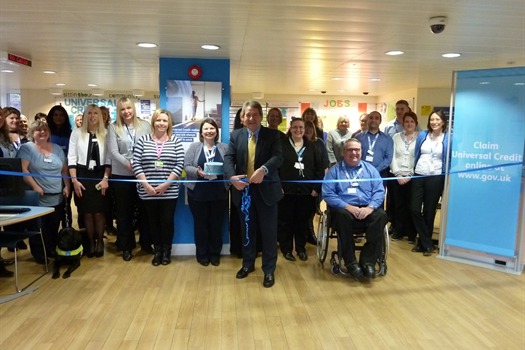 One advantage of Universal Credit is that unlike existing benefits, like Income Support, which had a 100% withdrawal rate, it will gradually taper away allowing claimants to take part-time work without losing their entitlements altogether. This means that people will always be better off in work, rather than staying on benefits.

‘Despite criticism and sniping from some quarters, Universal Credit will help people get back into work and I was delighted to visit the Jobcentre and see the real enthusiasm with which staff are embracing the new system.

‘Of course, there are always teething problems with all new systems and I have concerns that some claimants will find themselves in financial difficulties because they will be moving to a monthly payment system.

‘I took the opportunity when talking to the Jobcentre staff to urge them to do everything they can to ensure that anybody finding themselves in difficulties is provided with the help they need. I also emphasised that if they were not able to help anyone that they should advise that person to contact me so that I can raise the problem with ministers.’