What value do commuter’s add?

With just days to go until the planning application is submitted, there still remain questions over the viability of providing long term car parking provision. The revelation emerged during the leader’s statement to the Council last week, where Cllr Bowles, in response to commentary that the regeneration proposals will not work for commuters, is reputed to have said “that he was not going to ask the residents of Swale to subsidise commuters.”

Unfortunately Cllr Bowles is not available to either confirm or deny that is was the case. However whilst talking today with regeneration director, Pete Raine it was apparent that this is indeed a viewpoint being expressed, although not necessarily by Cllr Bowles himself.

It has however being confirmed that the Council has agreed to add an additional floor to the multi-storey car park, taking the total spaces to 310, a big leap from the previous range of between 220 and 270 spaces.

Speaking with the Spirit of Sittingbourne members Cathedral and Quinn Estates who are obviously busy finalising details of the application, I’m informed that the final car parking numbers are still in flux. 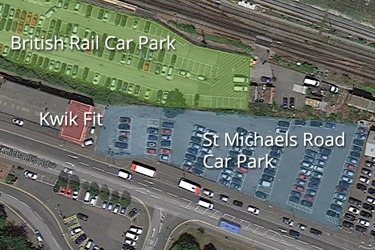 However, the hot news is that the entrance to the train station car is to be relocated adjacent to Kwik Fit which obviously has repercussions for yet another favourite commuter car park St Michael’s which will inevitably see a reduction in spaces, although no one can confirm how many at this point.

It is also well worth noting that the Swale Recreational Trust Land which forms the bottom half of this car park has been earmarked for use as the new community centre to replace Phoenix House.

So where does this leave commuters?

No decision has been made at this point about whether the new multi-storey car park will or will not allow for long term car parking. Certainly it was initially envisaged that this would be a short-term only car park. Regeneration director Pete Raine, suggests that this decision doesn’t have to be made now and that a lot may depend on the company that eventually operates the car park on the Council’s behalf.

Obviously whilst I cannot be certain what was meant by “subsidising commuters”, I can only imagine that it either relates to the profitability of short term parking verses long term parking or that someone in the Council actually believes those using short term spaces bring more money into the town.

I have no evidence by which I may dispute any of the above, but in defence of the majority of residents who do have to commute outside the borough to find work, and who I believe spend vast amounts of money locally, I wholeheartedly disagree. In fact this leaves me dumbfounded.

Cllr Bowles is not willing for residents to subsidise commuters ! Does he know where most people work especially so many of these newcomers !! There is industry in Sittingbourne but no where near sufficient to cover all the new houses he wants to build. I am beginning to really see where all the people who slag off our council are coming from - they really do not have a clue about this town !