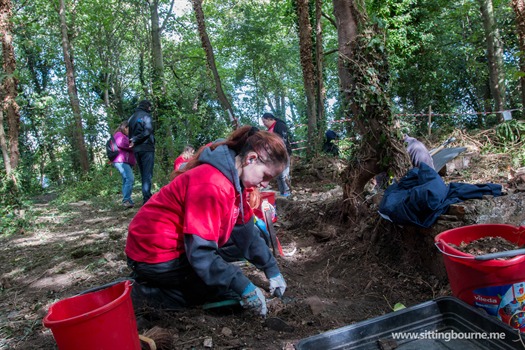 “The Historical Research Group of Sittingbourne (HRGS) started the project last year, where they came along and dug for a few days, and Justin Aggett from Sheppey Matters who does a lot of work with children with additional needs thought it would be good to get young people on site digging and it all spiralled from there.”

“So ultimately the idea has come from Justin and he approached us at Swale Community & Voluntary Services and said can you help me to apply for funding, which we managed to get through the Heritage lottery fund.” 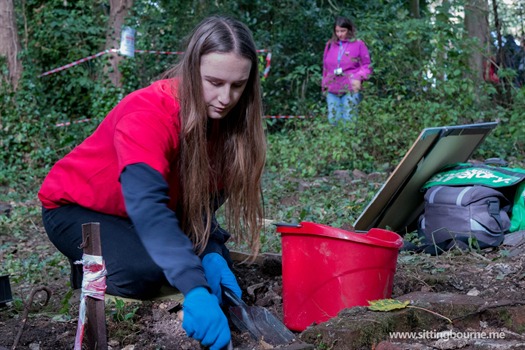 “Together we then approached HRGS and said this is a project we would like to do, with young people being on site doing the digging and it would also provide the opportunity to continue what they had started last year. And it has just gone from there really.”

“It’s been really good and once we have done the digs we are going to be providing workshops. So as well the digs we have got a 3D printer at the hub (in the forum) which we are going to be getting them to use. We are also going to be doing website training and we have a guy coming in to show them to show them how to upload photos and use of Facebook and Twitter. The idea is to eventually hand over the day to day running of the website and social media to them, combining the new technology in with the old.” 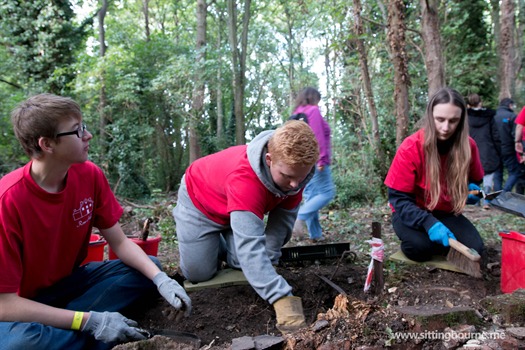 Justin Aggett, from Sheppey Matters told us “I meet up with Julia Walting from Swale CVS in December and by March we were funded. Heritage Lottery said we love the idea, additional needs, digital technology, heritage and digging a site that has some weight to it.”

“We have some nice workshops where we will be doing some 3D printing during the October half term. The idea is that the children are going to scan the artefacts, turn them into 3D models and you’ll be able to come in and rather than handle the actual artefacts you’ll be able to handle the 3D models. Then we can share the models online with other museums and schools and they will be able to get involved in 3D printing.” 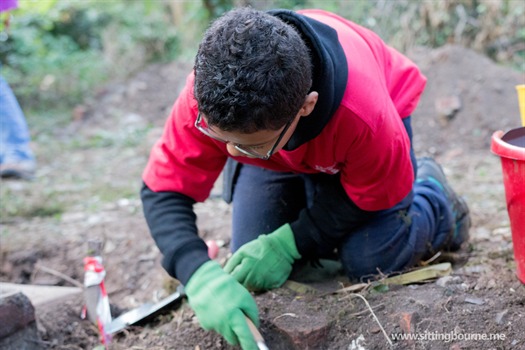 Rather impressively the dig attracted some 280 attendees and visitors over the course of the 6 days it ran, including 23 young volunteers registered for the Arts Award programme, and a further 6 young people who were too young to join the programme.

Talking with some of the young people involved in the project I was taken back by the display of sheer enthusiasm and genuine interest in the history of the site and objects they had found. They certainly appeared to relish the opportunity and it wasn’t easy work either, they were just as busy as the adult participants.

The finds were an assorted array indicative of occupation of the house over some 200 years, including drinks bottles and glass jars. More substantial finds include a fireplace in the gardener’s cottage with a tiled hearth, and mathematical tiles, that would have once adorned the main house. HGRS were also able to ascertain corners of the servants’ accommodation which enabled the true measurements of the buildings to be plotted; very important from an archaeological view. 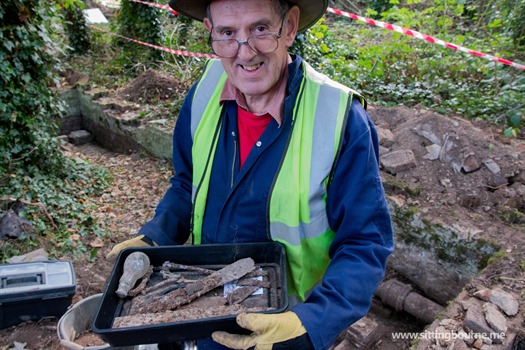 HGRS member Don Harris allowed me to inspect the area he was digging explaining “We are standing at the entrance to a greenhouse. This is the pathway in and steps down in through the door. The wall to our left is the back of the greenhouse on the north side, most greenhouses face south, and my college Graham is working on the boiler house, which is attached although not part of the greenhouse. Heated water would then pass through the pipes along the outside wall of the greenhouse in its own ducted area with the earth in the middle and a walkway up the side to tend the plants.”

“We didn’t investigate this last year, although we knew this was here, as a wall covered in moss was partly visible, plus the fact that we have the original plans for the estate. We decided when we came back this year we would look at areas we had not seen before which looked intriguing. Apart from that bit of green wall everything else you can see was hidden, and we’ve dug all this out in the last four days.”

Richard Emmett, HRGS Chair said “The great show of partnership working and involvement of young people and the community in exploring their heritage was exciting in finding out more of the history of this significant house and estate. But it also showed that we do have a lot of heritage to be proud of in Sittingbourne and that we have a community, including young people, who want to learn about, and be part of our heritage.”

“The support from The Heritage Fund was essential and welcomed, to enable the dig and ensure the young volunteers could participate in the excavations and to discover that this can be fun and exciting, and importantly for them to continue to be involved in the research and recording of the finds. The aim is that we provide the environment for them to learn new skills in new technology, to bring history to life.” 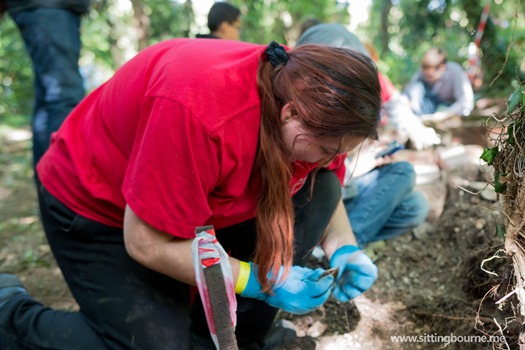 If you want to get involved and are between ages 11 -18 (up to 25 with additional needs) please contact Sandy on 01795 473828 or email sandy.hammock@swalecvs.co.uk – places limited to 10, first come first served basis. The activities will primarily take place at the Heritage Hub but some will take place at SCVS offices. They will be taking place during half term in the Heritage Hub. Monday 24th and Friday 28th October 10am to 12 noon. An end of project celebration event will be held in 2017 to demonstrate the heritage knowledge and the chance to display the history learnt in the young people’s own words.

Great article ! I know everyone mentioned and also how hard they have worked to bring this project to life.