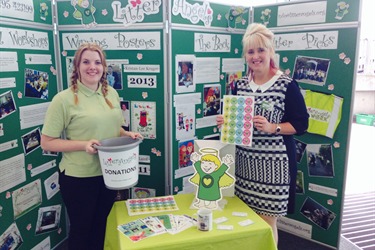 Sam Williams and Jess McMahon who ran the exhibition spoke to a number of customers about the charity and its anti-litter school campaign and gave out stickers to children. In total they raised £140, which will be used to help fund the charity’s work.

“It was really great to invite Litter Angels into store.

We have had a lot of fantastic feedback from customers about the positive impact that the charity has had on our local community.

We look forward to them coming back into the store later on this year."

“The Litter Angels team would like to thank Asda for letting us use their foyer area for our exhibition and for their continued support. We would also like to thank the ASDA shoppers who generously donated to the campaign.

“I would also like to thank those members of the public who took the trouble to share their views with us about littering problems in Swale, including litter dropped along the main roads and dog owners not clearing up the mess made by their pets. All the comments will be taken on board when we plan future Litter Angels campaigns.”

Litter Angels, which was set up by Gordon Henderson MP and is sponsored by a number of organisations, including McDonalds, is in the process of signing up local primary schools for this year’s anti-litter campaign, which will take place during September and October, with a theme of not dropping litter from cars.

Any school interested in taking part in the campaign can contact Jess McMahon or Sam Williams on 01795 423199.