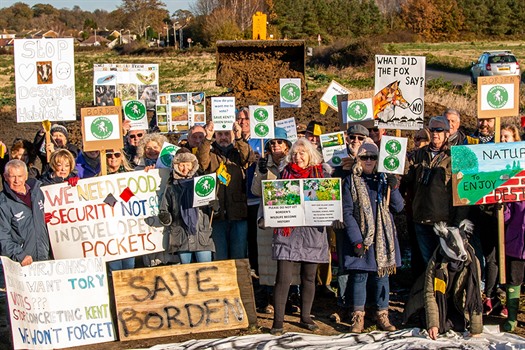 Members of the BRAD and Borden Wildlife Group

On Sunday 30 individual groups from all corners of Kent took part in a Day of Action as part of a co-ordinated campaign to highlight the scale of destruction due to development planned for Kent’s valuable green spaces.

Challenging developments in their areas, residents braved some bracing weather, to attend gatherings, walks and other events. 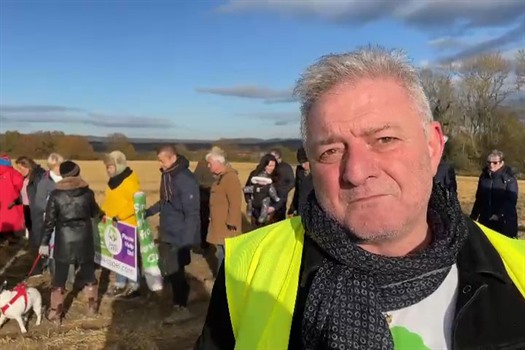 Commenting on the Day of Action, coordinator Dave Lovell said:

"The scale of development Kent is facing over the coming years, which is set to destroy more than 17,000 acres of agricultural land, wildlife habitat and valuable green spaces, eclipses an area the size of Manhattan Island in New York. And this is being added to at an alarming rate."

"We recognise that new homes need to be built, although we dispute the original targets set by the government which are now under question. What we are collectively calling for is that the right number of new homes are built on brownfield land and in the urban areas so badly in need of regeneration. We can have houses and green spaces, but it requires local authorities to choose the right option, not just the easiest one."

Long term local resident, Bob Geldof, joined campaigners walking in Faversham in protest at plans for 2,500 homes proposed for land owned by the Duchy of Cornwall.

He said: "I fully support Save Kent's Green Spaces Day of Action. I have lived in Kent for 40 odd years and to see what amounts to a full-scale attack on the county and its people gives a lie to this government's binding commitments to the UN Sustainable Development Goals of which Prime Minister David Cameron was co-chair; its own agreements under Cop26; and Boris Johnson's promise that they "would not build on green fields".

"No one disputes the need for housing, and everyone is in sympathy for those in need. And everyone, if consulted properly, democratically and locally without threat and listened to rather than being shouted at, bullied or commanded, will help the government toward a nationally agreed plan that accommodates what is necessary, what is possible, and where growth can best be absorbed." 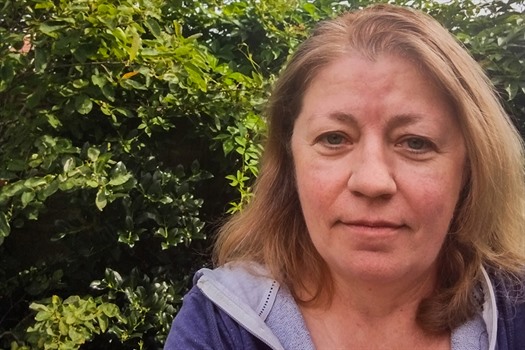 Only this week CPRE, The Countryside Charity, identified that capacity for brownfield housing has actually increased year on year, as developers shun brownfield sites in favour of developing greenfield land. CPRE also identified that the proportion of planning permissions for new housing on brownfield site has been in sleep decline, down by a quarter in just the last four years.

Dr Hilary Newport, CPRE Kent director, said: "Kent is reeling under crazily high housing targets that are both unsustainable and unrealistic. If our county is to retain its largely rural identity and maintain a desirable quality of life for residents, those targets need to be scaled back.”

"Further, local authorities should be able to reject unsuitable proposals that do nothing for local people and everything for developers without fear of their decisions being almost certainly overturned at appeal.”

"CPRE Kent has always been clear that some new housing must be built if the needs of its own population are to be met. However, increasingly, that is not what we are seeing – instead, there has been a focus on large, expensive properties way beyond the means of local people. That must change." 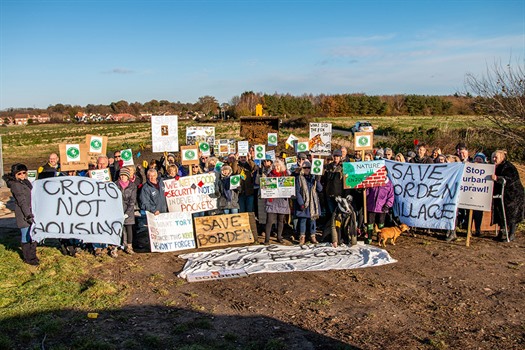 Members of the BRAD and Borden Wildlife Group

Borden Residents Against Development (BRAD) are a group that was originally set up to fight proposals for 675 houses on land in the south of Sittingbourne between Borden Lane and the A249, known as the Wises Lane development.

“We may have lost the battle with Quinn, but we will never give up the fight. It is imperative that we continue to protect our wildlife and green spaces in Borden, Swale, Kent and beyond.” 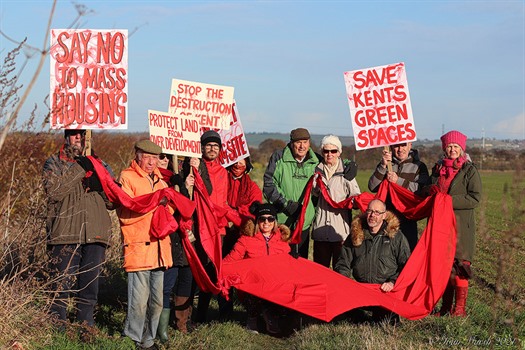 “This day of action was about getting Central government to change their housing allocations Nationally. The numbers are just too high. Kent has been allocated the highest numbers of houses in the Southeast with the least available brown field or other appropriate land available for building.”

“Here in Swale we are running out of land to build on - The fruit belt in Teynham has some of the highest-grade agricultural land in the country. This government wants to destroy this. Once the green fields are gone, they are lost forever.”

“I now cry as I walk in our beautiful Kent countryside at our future loss. We can and must change the developers advantages that this Conservative government has just given them.” 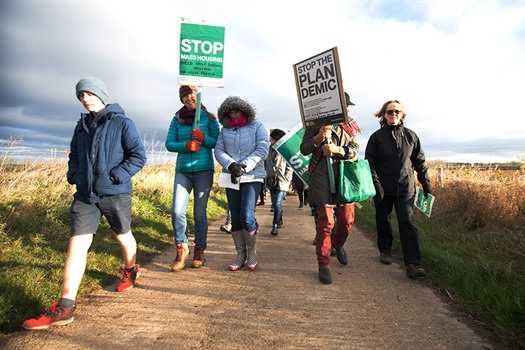 Farms, Fields & Fresh Air in Faversham are a group raising awareness to protect our Farms, Fields, & Air from constant mass housing development and the destruction and pollution of our natural environment.

Founder member Carol Goatham told us: “I have lived in Faversham all my life, my parents grew up here and spent years of their lives working on farms. I can’t bear to see our agricultural heritage concreted over.”

"We need urgent, strong strong legal change so these critical natural resources we depend upon, are protected by Planning laws."

"We are in a Climate and Environmental emergency - nature is seriously struggling and we are facing food insecurity if we don’t protect our farms."

"We need to put a stop to more Harmful Housing - no more volume housing estates of tens of thousands. Instead only Green homes on Brownfield sites - there are over 1 million homes that could be built not on Greenfields." 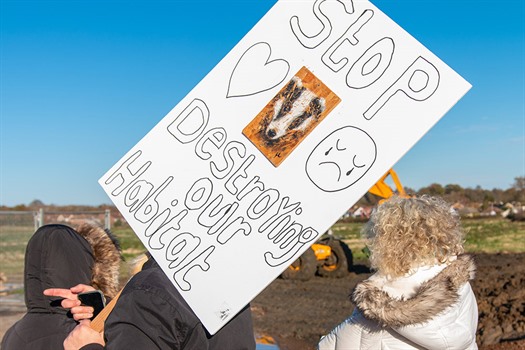 Dave Lovell concluded: “The sheer strength of support for Save Kent's Green Spaces shows the county is saying "enough is enough". We cannot continue to destroy the land we need so badly for food production and the mental wellbeing of the county's residents.”

“The focus of development must turn from greenfield to brownfield and urban regeneration, with the less environmentally damaging task of repurposing existing buildings, including the increasing numbers of empty commercial properties and office spaces around the county.”

"The government needs to put the Prime Minister's words about not building on green fields into policy. And it needs to be done now. That's the only thing that's going to stop this unfettered vandalism of the Garden of England."

IT’S TIME TO RETHINK WHERE WE BUILD HOUSES