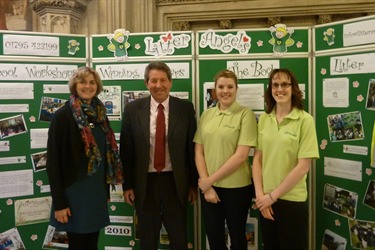 Litter Angels has gained the support of seven Members of Parliament in its campaign to extend its anti-litter message beyond Swale.

The MPs signalled their support at a recent exhibition that Litter Angels held in parliament and have signed up to host school workshops in their own constituencies.

The local charity, which was set up in 2008 by Gordon Henderson MP, and works in partnership with a number or organisations including McDonalds, Violia and Keep Britain Tidy, campaigns to create awareness, through education, about the harmful effects of litter on our local environment.

The exhibition, which ran from 31st March until 4th April 2014 in the Upper Waiting Hall in the House of Commons, displayed information about the school workshops, local litter picks and the Litter Angels book.

The Litter Angels team were also visited by a number of guests including Matt Hogben, the manager of McDonalds on the Sittingbourne Retail Park, and Claire Fosbeary, the Community Life Champion from Asda in Sittingbourne.

'I am pleased with how successful the exhibition was and that a number of my parliamentary colleagues want to get involved. There are exciting times ahead for the charity.”